Candidates who have appeared for SSC JE (Paper-I) need to wait for some more days to know their result. SSC JE result 2018 which was scheduled to be announced on March 26, 2018, will now be made available on April 16, 2018. Upon declaration of SSC JE 2018 result of Paper-I, the applicants will be able to check it by entering their roll number from the official website, ssc.nic.in.

The candidates who have appeared for the exam will be able to check the result and also know the marks and rank scored by them in SSC JE exam. The examination was held in January 2018, by SSC for recruiting junior engineers in various government departments from the branches of Electrical, Civil, Mechanical and Quantity Surveying & Contract.

The new schedule of SSC Junior Engineer result 2018, has been notified on the official website by Staff Selection Commission itself. In the exam held from January 22-29, 2018, a total of 9,95,350 candidates registered for the paper – I out of which 5,70,189 applicants took the exam for the post of SSC JE. The result of the said examination will be declared by the Commission on April 16, 2018. 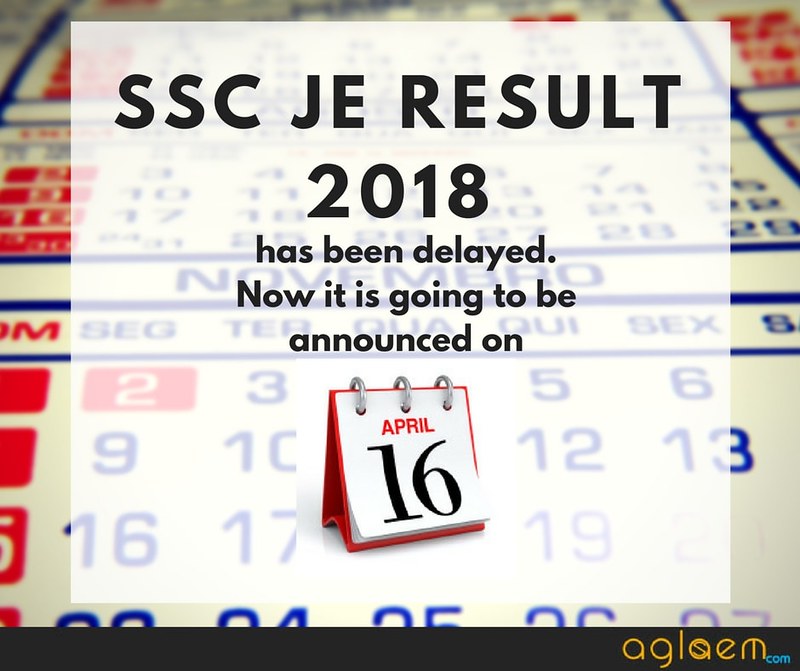 In order to check the result, candidates will have to visit the official website, ssc.nic.in, and click on ‘Result’ tab. Thereafter, they have to select ‘JE’ column and finally check the result released in PDF format. SSC JE result 2018 is going to have all the important information that will make it easy for the applicant to check the qualifying status. The result will also show the category wise marks and selection status.

The candidates who will clear the objective type test by scoring minimum cut off marks will be called for descriptive type test. The cut off is decided by SSC on the basis of candidates who took the exam, the highest marks scored by the applicant and the toughness of the exam. Considering these factors the cut off marks are decided and your qualifying status is decided. The candidates who will qualify SSC JE 2018 Paper I will only be allowed to appear for Paper – II. The admit card for the same is going to be soon made available on the official website.

Looking at the previous year cut off, the expected cut off for SSC JE Tier-I 2018 can be:

SSC JE exam was held after the recruitment board released notice to hire the candidates to fill various posts of Junior Engineer. As soon as the application form for the same started, a large number of applicants started filling the form. Now all those are eagerly waiting for SSC JE result 2018.

Alongside, the notification also stated that the Commission will be announcing the result of Paper-II of Multi-Tasking (Non-Technical) Staff Exam on March 31, 2018. The exam for the same was conducted on January 28, 2018. A total of 1,43,657 applicants took the exam out of 1,59,183 candidates who were shortlisted from MTS (NT) (Paper-I) exam.

UPSC CDS I 2018 Result Announced; 8261 Candidates will be Called for SSB