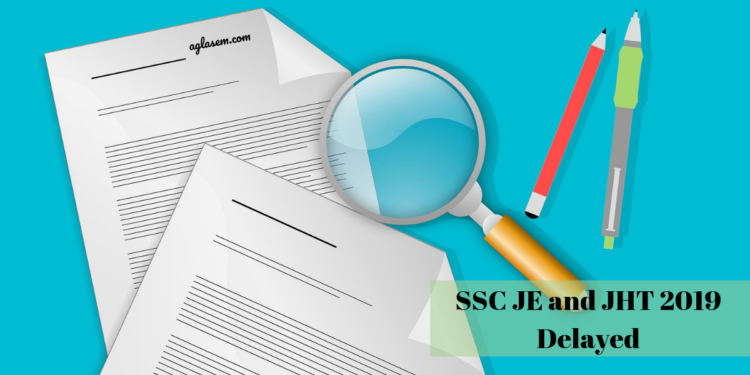 Staff Selection Commission (SSC) has delayed the release of official notice for SSC JE and SSC JHT 2019. Earlier, the notice was to release on August 01, 2019. However, now the Commission will release it on August 13 and August 20 for SSC Junior Engineer and SSC Junior Hindi Translator. Along with this, SSC has also disclosed that the official notice for Phase-VII/2019/Selection Posts will release on August 06, 2019.

SSC JE and SSC JHT are very popular recruitment among the youth. Both the recruitments are conducted for filling numerous vacancies in various Departments / Organizations in the Government of India. The posts are defined under Group B (Non-Gazetted), and candidates are recruited under Level- 6 of pay matrix of 7th Central Pay Commission, i.e. pay band of Rs 35400-112400.

SSC JE 2019 recruitment will be done for the posts of Junior Engineer in Civil, Mechanical, Electrical, Quantity Surveying and Contracts. Citizen of India below of age (27-32, as per post) with degree or diploma in respective engineering fields are eligible to apply. On the other hand, to apply for SSC JHT recruitment, candidates should be below 30 years of age and must possess master’s degree in Hindi, with English as compulsory or elective subject. This is a basic criteria of eligibility and the details will be out with the official notice.

The selection process, for both, comprises of Paper 1, Paper 2, and document verification round. SSC JE Paper 1 is a 2 hour examination, in which candidates have to solve 200 questions of multiple choice type. 50 question each are asked from general intelligence and reasoning and general awareness, whereas, 100 question are from subject paper of general engineering.

The Paper 1 of SSC JHT is also a 2 hour paper, in which candidates have to solve 200 question. The exam is held in computer based mode and the questions are asked from general English and Hindi. In both the examinations, the questions are of 1 marks each and for choosing incorrect answers negative marking of 0.25 marks is done.

The Paper 2 of SSC Junior Engineer and Junior Hindi Translator are written exams of 300 and 200 marks, respectively. The part A of SSC JE is based upon general engineer (civil and structural), whereas, part B comprises of general engineering in electrical or mechanical. As far as SSC JHT Paper 2 is considered, it is about Translation and Essay writing.

To participate in the recruitment, the candidates have to register. The registration will open at ssc.nic.in and the candidates will have to pay Rs. 100 to apply. In the application form, candidates to enter basic details such information about themselves, education qualifucation they had, etc.