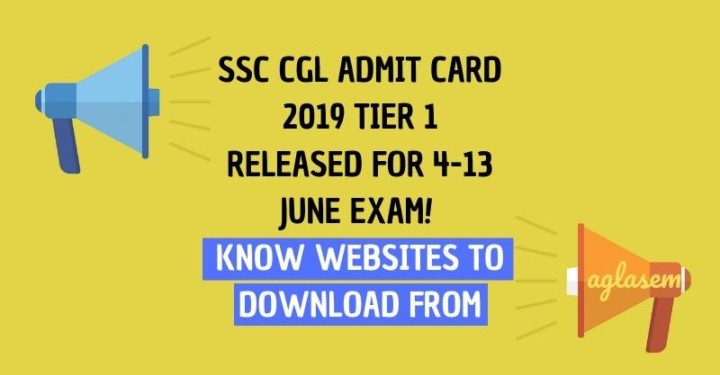 Staff Selection Commission has released admit card of SSC CGL 2019 Tier 1 exams scheduled to be held from June 4 to 13, 2019. All candidates who had applied for Combined Graduate Level exam can now download their admit card from websites of regional and sub-regional offices of SSC.

At time of filling application form, candidates had to select exam centre city. Now each city falls under the jurisdiction of only one SSC regional or sub-regional office. Then depending upon which exam city candidate has chosen, he/she can download admit card for SSC CGL 2019 Tier 1 from website of that office.

Application status check and admit card download began on May 16, 2019, with one SSC releasing it first. In SSC CGL 2018-2019 notification, it says that “Facility for download of Admit Cards will be available at least one week before the examination on the website of concerned Regional/ SubRegional Office.” And as promised, exactly one week before exam, last SSC to issue admit card is Northern Region that released it on May 28, 2019. After exam, SSC CGL Answer Key 2019 shall release at ssc.nic.in.

In days building up towards the exam, candidates should practice previous year papers and take online CGL mock test. Tier I exam shall be a computer based test with 100 questions, 200 marks.