A notice with RRB NTPC (CEN 01/2019) exam dates has recently appeared online. It contains dates of the four crucial events, all in the year 2020, of RRB Non Technical Popular Categories recruitment that 1.26 crore applicants had been waiting for. 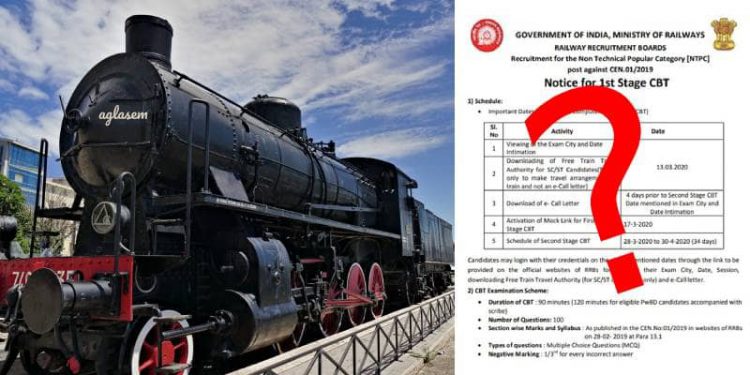 An RRB NTPC exam date, admit card notice has appeared online on various platforms today. As per candidates, they have been receiving a pdf notice and a newspaper clipping image from different sources since last night.

This notice says, first of all, that RRB NTPC exam city and date intimation will be on March 13, 2020. At the same time SC/ST candidates will be able to download free train travel authority to make arrangements for train travel. Then, it says, that e-call letter download will start 4 days prior to the exam. The date of activation of mock link it says is March 17, 2020. And the exam date is March 28 to April 30, 2020.

Other than the notice, a newspaper clipping with a news in hindi has also emerged, as per which too railway exams will start from March 28.

As per analysis of both the documents, the notice is fake and the newspaper clipping is old.

It may be noted that railway recruitment exams were held in the year 2016 also. And in that year, the exam dates were March 28 to April 30, the same dates that have been mentioned in the notice and newspaper clipping.

The newspaper clipping is from Patrika newspaper, of Rajasthan, and it was published in the year 2016. Thus it is not a fake news clipping, but an old being used to mislead candidates today. Candidates can verify that the ates, centre numbers, and other details mentioned in the news is the same that was in 2016, and it will be too much of a coincidence for all the figures to repeat themselves 3 years later.

As far as the RRB NTPC exam date and admit card notification is concerned, it has too many errors factually to be a real one. For example, it says, about admit card “4 days prior to the second stage CBT date mentioned in the exam city and date intimation”, whereas this will be the 1st stage CBT, and not 2nd; railways cannot make such a big blunder in its official notice.

Other than that, the notification states the exam pattern to be CBT of 90 minutes, number of questions to be 100, multiple choice questions, negative marking of one-third, but in the section wise marks and syllabus it says “As published in the CEN No 01/2019 in websites of RRBs on 28-02-2019 at para 13.1”; but in the para 13.1 of the notification, the exam pattern is different.

In RRB CEN 01/2019, the 1st stage CBT for NTPC recruitment will be of 90 minutes, and have 120 questions. There will be 50 questions of general awareness, 35 of mathematics, 35 of general intelligence and reasoning. Negative marking will be ⅓.

IIFT 2020 Result to be declared by NTA today: 10 Important things you should know

Bank of Maharashtra Recruitment 2019: Notification out for 350 vacancies, Apply online at bankofmaharashtra.in

Bank of Maharashtra Recruitment 2019: Notification out for 350 vacancies, Apply online at bankofmaharashtra.in