RRB Bhubaneswar has published a notification at rrbbbs.gov.in to convey that since cyclone Titli is forecast on October 11 and 12, 2018, therefore it is rescheduling RRB Group D 2018 exam at all centres under RRB Bhubaneswar jurisdiction that is at Bhubaneswar, Cuttack, Dhenkanal, Sambalpur, Khurda, Berhamapur cities on these two dates.

Those candidates who were initially scheduled to appear for the first stage computer based test in any shift on any of these dates will get new exam date, city, shift, timings and admit card. RRB BBS will send intimation regarding the same through registered email ID and mobile number of the candidate. 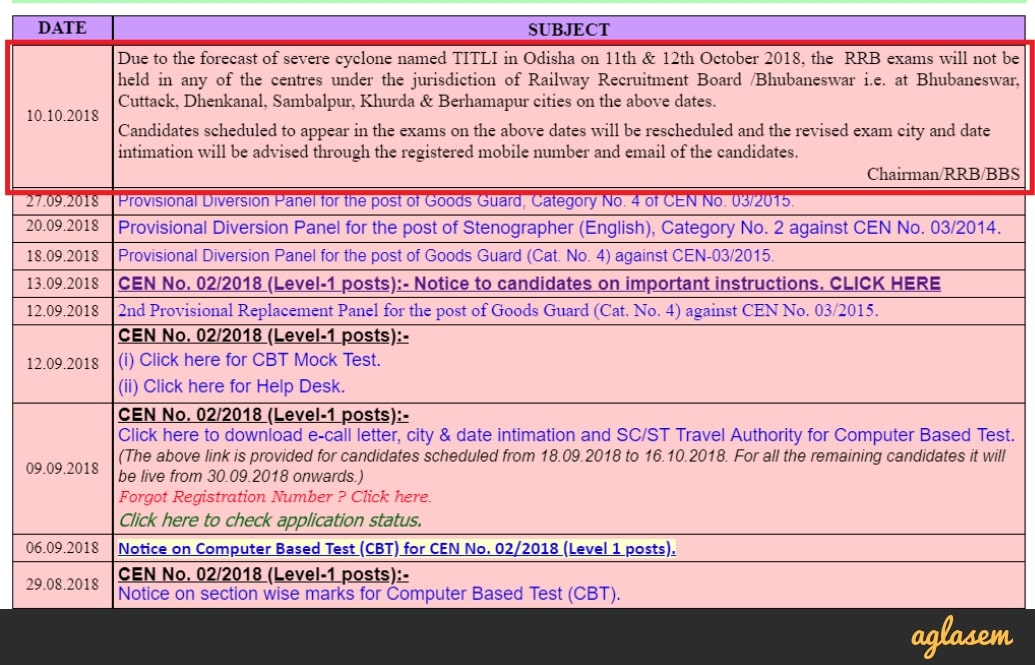 This is the second time that a natural disaster has become the cause of exam cancellation for Railway Recruitment 2018. Earlier this year, the Assistant Loco Pilot and Technician first stage computer based tests were postponed due to Kerala Floods.

RRB Group D recruitment 2018 comprises of a computer based test that acts as the first stage of selection, followed by physical efficiency test that is the second stage.

Until now, exam dates of all candidates whose exams are scheduled or held between September 17 to October 26, 2018, have been displayed. Also admit cards are being issued in such a way that every candidate can download his/her RRB Group D Admit Card 2018 from exactly 4 days before his/her exam. For the exams that have concluded, there are also available memory based question paper and answer key.

The number of candidates that will be called for physical efficiency test will be 2 times the number of vacancies in each category. In this test, shortlisted candidates have to perform activities as defined in the centralized notification.

With an employee strength of over 1.4 million, Indian Railways is counted among the largest employers in the world.