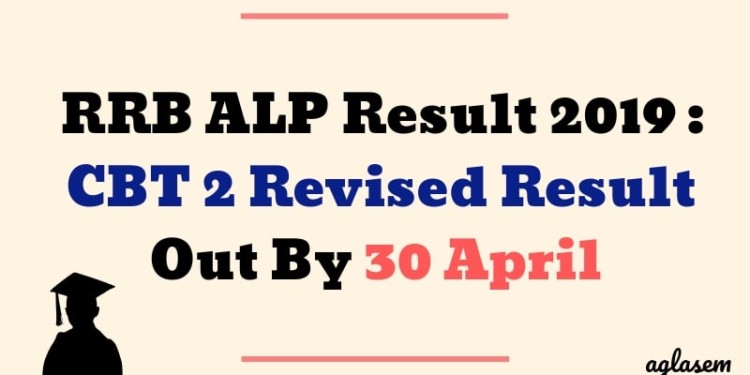 As per one of the national daily, the Railway Recruitment Board (RRB) is likely to announce the RRB ALP CBT 2 Revised Result by April 30, 2019. The result will be published in online mode at the zonal websites of the RRB which is 21 in the count in 2 forms, merit list, and scorecard. The RRB ALP CBT 3 dates are yet to be announced by the board.

The RRB ALP CBT 2 Result 2019 was announced on April 05, 2019. The reason why the board is announcing the revised result of RRB ALP CBT 2 is that there was an error in the scorecard which was released on March 24, 2019. Also, representations regarding the answer key, score, normalization of marks, etc have also been reported. Now, the board is considering all the representations and as per it the revised result will be announced.

Candidates need to score 42 marks in each test battery to clear this round. On the day of the CBT stage 3, students also need to present the Vision Certificate as per the prescribed format. Candidates who fail to carry the certificate on the day of the exam then he or she will not be allowed to take the test. In this round, the questions will be asked only in English or Hindi. There will be no negative marking in CBT stage 3.

RRB ALP and Technician recruitment is open for 64371 vacancies. Out of which 27795 vacancies are for Assistant Loco Pilot (ALP) and 36576 are for Technicians. The selection of the candidates is on the basis of the 4 stages, CBT 1, CBT 2, CBT 3 and document verification. The final appointment of the candidates is done after passing the requisite medical examination held at the Railway hospitals.