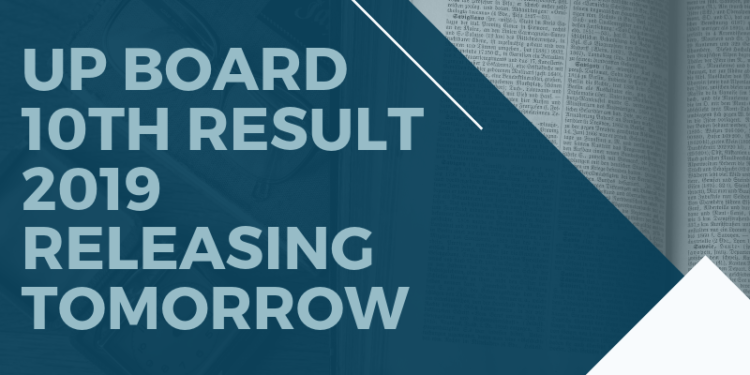 As per the official notification released on April 25, 2019, the Uttar Pradesh Madhyamik Shiksha Parishad is announcing the result of class 10 tomorrow i.e. on April 27, 2019, at 12:30 pm. According to the notice issued by the Board’s Secretary Neena Shrivastava, UP Board 10th result 2019 will be declared at the headquarter located in Prayagraj.

How to Check Result of Class 10

Candidates will be able to see the result of class 10 online at upresults.nic.in, upmsp.edu.in, and upmspresults.up.nic.in. Students will be required to submit the roll number to find the results. Other than this, there are some third-party websites which declare the result name wise. So, the students will have to just enter their names to know the results.

This year, more than 58 lac candidates have taken part in the exams of class 10. Out of which 31,95,603 students are from high school standard. The exams were held from February 07 to February 28, 2019. There were about 8,354 examination centers which were situated in 75 districts of the state. Out of all, 1,314 examination centers were marked as sensitive while 448 centers were labeled as highly sensitive.

What After Result Declaration

Candidates who would not be able to get the passing marks in the exams, the UP board will provide them the opportunity to appear for the compartment or improvement exams. As per the previous year, the improvement or compartment exams are expected to be conducted in the last week of July 2019. The interested candidates who will appear for those exams will get their results in the month of September 2019.

In the previous year, more than 60 lac candidates enrolled for UP Board exams 2018. Out of the total students, 36,55,691 were from class 10. The exams were held at 11,000 centres across the state. The answer sheets of the candidates were evaluated by 1.25 lakh teachers. Out of the total appeared candidates, 75.16% of students passed the examinations. Last year also, the girls performed better than the boys. The overall pass percentage of boys was 72.3% while 78.8% of the girls cleared the exams in 2018.

All the best for the exams. For any query or question, candidates can use the comment section provided below.