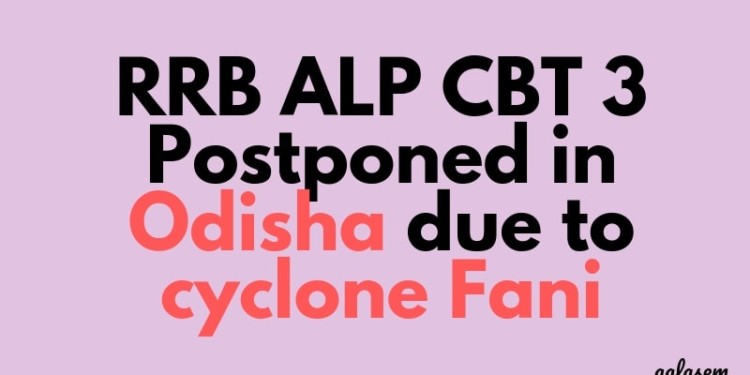 The Railway Recruitment Board (RRB) has postponed the RRB ALP CBT 3 2019 in Odisha. The exam was earlier scheduled to be held on May 10, 2019, in three sessions. The CBT 3 for all the other states is going to be held on the due date only. The new dates for the Odisha students will be announced by the board soon.

The RRB ALP CBT 3 has been rescheduled for cities like Bhubaneswar, Cuttack, Behrampur, and Sambalpur under the RRB Bhubaneswar and Balasore under RRB Kolkata. Intimation will be sent to the Odisha candidates on their registered contact details via SMS or email about the postponement of the stage 3 exam. On the day of the exam, students must carry the RRB ALP CBT 3 admit card.

Along with the admit card, candidates need to carry the one valid photo id proof, vision certificate, and passport size photograph on the exam day. It is compulsory for the candidates to carry the vision certificate as per the format as then only he or she can appear for the exam. The identity proof can be aadhaar card, voter id card, pan card, college id, driving license, passport, etc. The photograph should be same as uploaded at the time of filling of the application form.

Candidates are required to secure 42 marks in each of the test battery to be eligible for the Document Verification. In the RRB ALP CBT 3, there will be no negative marking. Students will get 71 minutes for this round. Stage 3 CBT assess the cognitive skills of the candidate.

Students qualifying the CBT stage 3 will be shortlisted for the document verification. In this round, the board checks the eligibility claims of the candidate. Applicants have to carry the original as well as two sets of self-attested photocopies of the necessary documents on the day of document verification.

The documents can only be presented in English or Hindi in the RRB ALP document verification round. If the certificate is in some other language then, one must produce the self-attested translated version of the same. Failure of submission of the relevant documents will result in the cancelation of the candidature.