Delay in PSEB 12th Result 2018; Punjab Board to Conduct Re-Exams The exams are being re-held due to leak of question papers and also for the clash of exam dates. Now, PSEB has released the revised time table for the students of class 12.

The exams of General Punjabi and Physical Education & Games will be held on April 18, 2018.

PSEB will conduct the exam of Environmental Education on April 19, 2018. 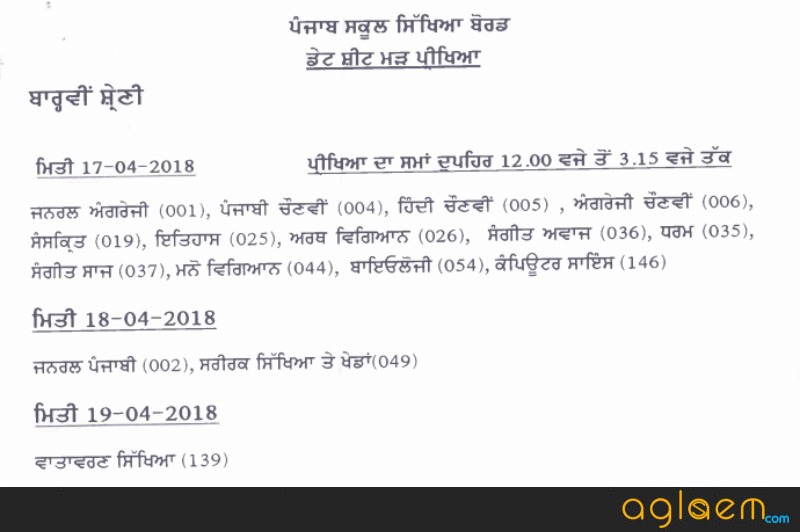 The candidates who are going to give the compartment exams will have to pay Rs. 100/- as the fees otherwise in all conditions, the respective schools will pay the fee. The exams which had been canceled due to the clash of the exams will now be conducted in the different exam centres.

This year, about 3,18,834 had registered themselves for the exams of Plus Two class. In which around 80,000 students will re-appear for the exams.

Earlier, Punjab Board Mathematics question paper was leaked and the board decided to re-conduct it on March 31, 2018. Everyone thought that the last date of the exams has increased to 31, March from March 24, 2018. But the authority made a twist at last. PSEB is now conducting the exams of those subjects again which could not be happened at the same specified date due to either leak of the question papers or due to the clash of the exams of the different subjects on the same date.

Last year, PSEB 12th Results were declared in the month of May 2017. So it is expected that this year the dates of releasing the result will be near to the last year’s dates.

The students who will appear in Punjab Board exams will be able to check the result on the official website http://www.pseb.ac.in. To check the result, the candidates will have to first access the link to check it. Students will have two ways to do so. Either they can enter the valid  Roll Numer or the Name to check it. After following the above steps, click on “Get Result” button.

As you know that there is no much time left for the exams so the students are advised to do the revision of their respective subjects.

All the Best Students who are going to appear in the re-exams conducted by Punjab Board. For more updates regarding PSEB 12th Result 2018, keep tracking the page.

NEET 2018 Admit Card: Likely to be released today; Know how to download