Home » NTA To Conduct JNUEE 2019 In May 2019; Confirmed Via Official Circular At jnu.ac.in Another entrance exam has been added to the queue of NTA. Now, it is confirmed that the National Testing Agency will conduct the JNU Entrance Exam 2019. The Jawahar Lal University has released an official notice to validate this news on December 10, 2018. In the notification, it is clearly mentioned that the Jawaharlal Nehru University, New Delhi has been associated with NTA and from now onwards, the JNUEE exam will be a Computer Based Test and will be conducted by NTA.

Earlier, the JNUEE 2019 was expected to be held from December 27 to December 30, 2018. But a few days prior, it was speculated that it would be postponed. Now, JNU has made everything clear by releasing the notification. 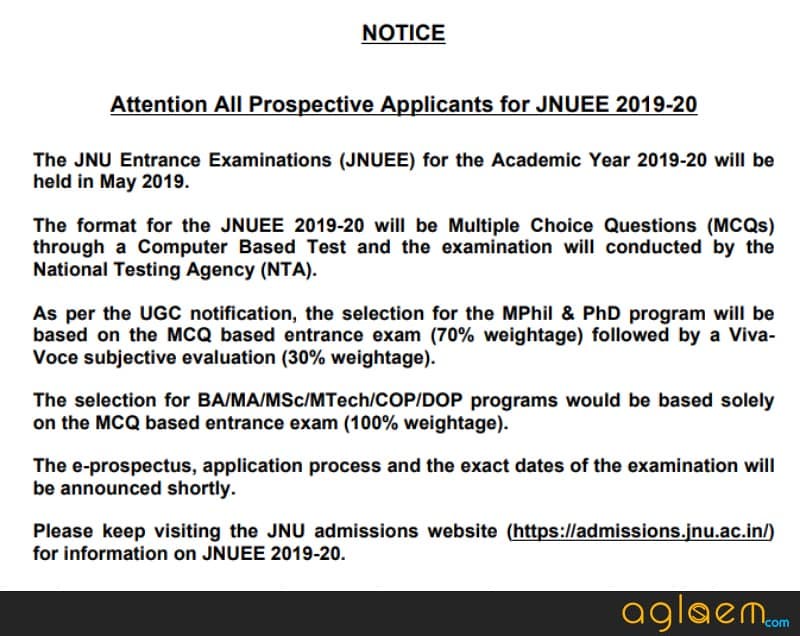 According to this notice, JNU Entrance Examinations will be held in the month of May 2019 for the academic year 2019. However, there is no specific date available for the exam. But the month in which the exam will be conducted is finalized. The exam pattern for JNUEE has also been modified for the convenience of the candidates. Though the aspirants face issues related to discomfort while appearing for the exam in December. So, from now onwards, the JNUEE will be conducted in online mode and the question paper will consist of the multiple choice questions.

Till now, all these information has been finalized. The prospectus, application process, and the important dates for JNUEE 2019-20 will be notified later. To know the other important factors, the candidates can visit the official website admissions.jnu.ac.in.

As per the notification released by UGC, the selection for the courses such as M.Phil. and P.H.D. will be done on the basis of the MCQ based exam and Viva Voce subjective evaluation. The ration of both criteria is 7:3 in the entire selection process.

The candidates will be selected for BA/ MA/ MSc/ M.Tech/ COP/ DOP solely on the basis of the MCQ based entrance exam.

Other than this, NTA also conducts the other big entrance exams such as  NEET, JEE Main, CMAT, GPAT, and UGC NET. JNU is the first Central University which has collaborated with NTA. In the previous year, more than 1 lakh candidates had appeared for the JNUEE.

24 More Institutes Recommended For ‘Institute Of Eminence’ Tag; UGC Holds Back Discussion Until Next Meet