President Ramnath Kovind has released the National Institutional Ranking Framework (NIRF) Ranking 2019 for higher educational institutes in India. It has been released in nine categories on the basis of performance by the institutes. The top 10 places have been secured by 7 Indian Institute of Technology (IITs), Indian Institute of Science (IISC), Jawaharlal Nehru University (JNU), and Banaras Hindu University (BHU).

In the Overall NIRF Ranking, 100 higher education institution has been ranked. This year, the Delhi University ranking is dipped by 6 six positions from Rank 14. The only Indian Institute of Management (IIM) in the overall category is IIM Calcutta, its position is remarkably increased to Rank 26 from Rank 34. Among National Institute of Technology (NIT), NIT Tiruchirappalli secured Rank 3

In the Engineering NIRF Ranking 2019, no doubt top 10 places are occupied by the 8 IITs. They are IIT Madras, Delhi, Bombay,  Kharagpur, Kanpur, Roorkee, Guwahati, and Hyderabad. The Rank 9 and 10 institutes are Anna University and NIT Trichy respectively. Other than this, private colleges like SRM University, KIIT University, VIT University, etc have also secured a place. 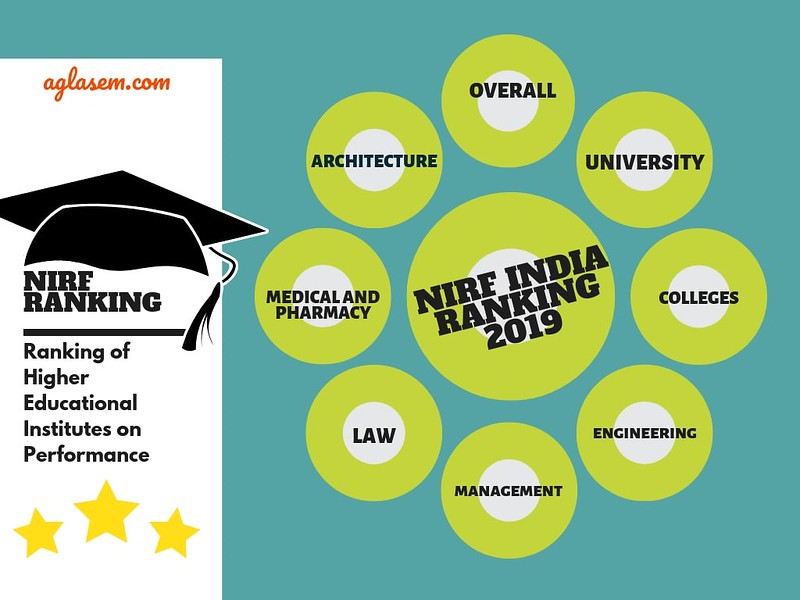 In the University category of NIRF Ranking 2019, IISC tops the list. The second and third rank has been given to JNU and BHU. Following it, Unversity of Hyderabad, Calcutta University, Jadavpur University, Anna University, Amrita Vishwa Vidyapeetham, Manipal Academy of Higher Education, and Savitribai Phule Pune University gets the subsequent ranks.

In the list of top colleges in India, Miranda House is again ranked first. Following it, in the second and third positions are Hindu College and Presidency College respectively. Most of the colleges in the top 10 are from Delhi University only. St. Stephen’s College and Shri Ram College of Commerce ranks at fourth and seventh position respectively.

To know what college suits you after 10+2, visit apply.aglasem.com, and apply for your dream college.