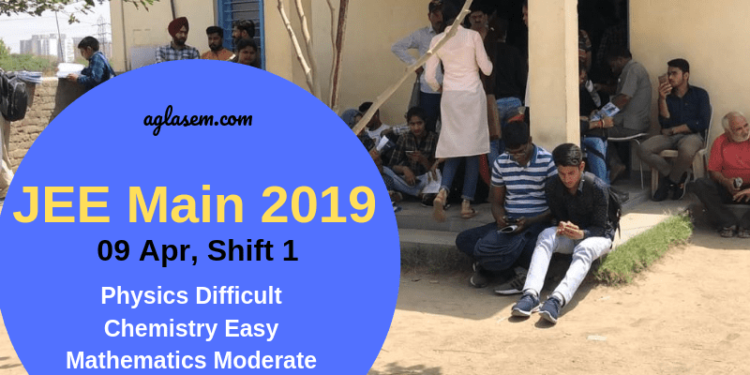 The candidates who appeared in the shift 1 of JEE Main 2019 on April 09, 2019, say that the paper was overall Moderate. The physics section was difficult, Mathematics was moderate and Chemistry the easiest. The paper started at 9:30 AM and ended at 12:30 PM. Shift 2 will start at 2:30 PM. The difficulty level of January and April attempt remains the same in shift 1 today and there were no repeated questions.

As per the initial student analysis of the paper was Physics had many questions from 11 and they were quite difficult. In physics, there were practical based questions where the candidates have to fond critical temperature. There were questions from EM waves, Optics, however this time there were fewer questions from Mechanics.

In this shift, the candidates are expecting marks between 90-200 out of 360. The paper was not much lengthy and the candidates could attempt all the questions.

On April 08, 2019, the first paper 1 exam was held in 2 shifts. The analysis of both the shifts as per the students reveals that the Physics section was the most difficult one, Mathematics was moderate and the easiest section was that of Chemistry.

The candidates gave the same verdict as always. Most of the students said physics was lengthy and difficult, Mathematics as the moderate section and the easiest section was Chemistry. Many questions in Physics was asked from Thermodynamics, Optics, Mechanics and EM waves. In Chemistry, most of the questions were from Organic Chemistry and it had many chemical equation based questions. In mathematics, many questions were from 3D geometry, coordinate geometry, and trigonometry. The answer keys of the exam are also made available after the exam by the coaching centers like Vibrant, Career point, and Resonance.

However, after 2-3 days after the exam is over in all the shifts NTA also uploads the response sheets and question papers. To check the same, the candidates have to visit jeemain.nic.in and log in using their application number and password/date of birth.

The cutoff for paper 1 and paper 2 candidates will be made available over the result and the result will also have the AIR of the candidates. The AIR will form the basis of admission in the IIITs, NITs, and CFTIs.