National Institute of Open Schooling (NIOS) is due to announce NIOS D.El.Ed Result 2018 for the May / June examination. Candidates throughout the nation are looking for the result and there are several links available. But the question is, are these NIOS D.El.ED Result link real or fake?

In past one day students have been searching for the result frantically, but no official announcement for the same has been made by NIOS. On digging deep, we found out that certain whatsapp message sent out a bit.ly link (short url) stating that result has been declared. The link directed candidates to a web portal which does not seem to have any association with NIOS.

Many youtube videos have also been uploaded which claim that this is the link for the result and candidates can check result via it by entering the enrollment number and e-mail address. However, candidates should note that this link is fake. 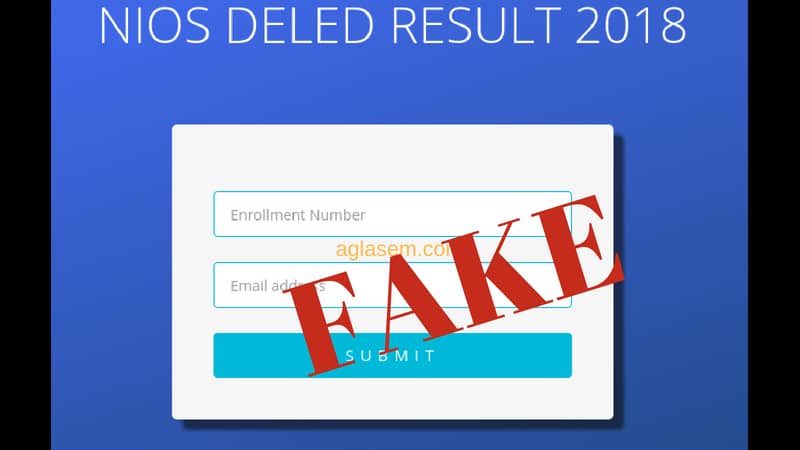 NIOS has not uploaded any notification for result announcement on the official website. However, there are few result links which are official but candidates are not able to check result through it as well. In both the links, candidates are asked to submit the Roll Number of NIOS D.El.Ed.

Aglasem is constantly trying to reach NIOS, but due to some or the other reason the authority is out of reach. As soon as the result of D.El.Ed will be announced officially, we will update it on our page for NIOS D.El.Ed 2018.

Result is not Out but Dates for NIOS D.El.Ed 2nd Year Exam have been declared

All the best to all the candidates who are waiting for their NIOS D.El.ED Result 2018. Help us provide accurate information. If you are able to check your result, through any medium, do let us know. Tell us in the comment section from where you could check your result. Also, keep visiting, NIOS Result page for all the latest updates on the result. Good Luck!