This is not the first time the Medical CounciliCommitteetee (MCC) has messed up something. In its newest addition, the MCC retracted the list of candidates who had been allotted a seat in the first counselling for NEET PG qualified students. In a notice published at its official website, it has been stated that the list published on March 28, 2018, stands ‘null and void’. MCC will announce the fresh allotment list soon on the official website. The last date for reporting has also been extended to  April. 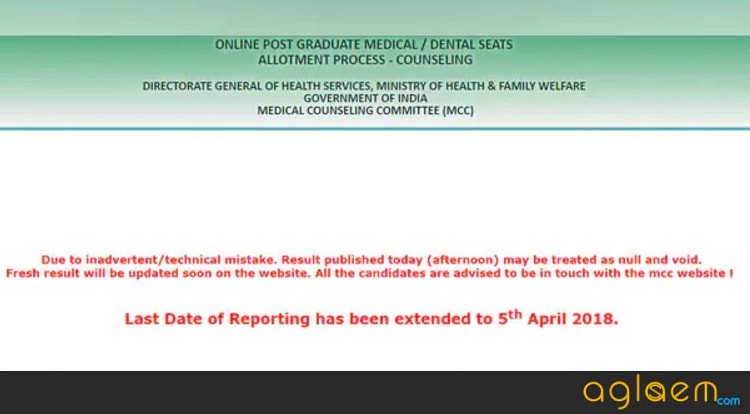 This act of carelessness by the MCC is bound to cause inconvenience to students as it will delay the counselling and eventually the admission process. A lot of people took to Twitter to show their disappointment regarding the technical glitch.

NEET PG 2018 first seat allotment list has been retracted by MCC. This a major goof up in PG medical admission as thousands of aspirants are on tenterhooks with the Centre declaring the NEET PG counselling as null and void due to the technical error. Meanwhile, several states have begun the counselling process for state quota seats.

The counselling process for state quota seats in Karnataka has been halted by Supreme Court. The apex court was hearing a petition by Dr. Kriti Lakhina and 39 others. A notification was issued by the Karnataka government making a minimum 10-year study in the State mandatory to qualify for government seats in PG medical courses. However, as per the petitioners, the eligibility conditions set by the government of Karnataka ‘is violative of their fundamental right to life and equality and is discriminative’.

This year, the deemed medical institutes were also included along with the All India Quota for NEET PG 2018 Counselling. The candidates had to regsiter, pay the fees and submit the choices of course and college. Then, the MCC releases the result for First round of seat allotment. If the candidate has been allotted a seat in first round, then he/she must report to the allotted institute, complete Admission formalities and give willingness for upgradation in 2nd round. The same procedure of counselling is followed by the Deemed/ Central University, except that there shall be a Mop up Round as well for Deemed Universities.

At the time of counselling, the candidates need to bring the documents like, a) Admit Card issued by NBE, b) Result/Rank Letter issued by NBE, c)Mark Sheets of MBBS/BDS 1st, 2nd & 3rd Professional Examinations, d) MBBS/BDS Degree Certificate/Provisional Certificate, e) Internship Completion Certificate/Certificate from the Head of Institution or College that the candidate shall complete the Internship by 31st March, of the year of admission, f) Permanent/provisional Registration Certificate issued by MCI or DCI/State Medical or Dental Council, g) Provision Registration Certificate is acceptable only in cases where candidate is undergoing internship land likely to complete the same on or before 31st March of year of admission, h) High School/Higher Secondary Certificate/Birth Certificate as proof of date or birth, i) One of the identification proofs (ID Proof) to the allotted college at the time of admission (PAN Card, Driving License, Voter ID, Passport or Aadhar Card), j) Caste Certificate.