Home » Maharashtra SSC Examination Result July 2019 to be out tomorrow at 1 pm: mahresult.nic.in 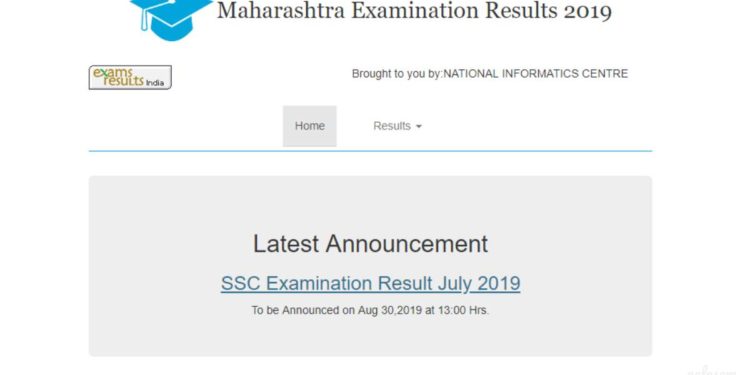 Putting an end to the speculations on date of result of supplementary SSC examination held by Maharashtra State Board of Secondary and Higher Secondary Education Pune, it has been officially announced at mahresult.nic.in that SSC examination result July 2019 will be announced on August 30, 2019, at 1 pm.

The announcement has been made via the official website mahresult.nic.in. The latest announcement section there says “SSC Examination Result July 2019 To be Announced on Aug 30,2019 at 13:00 Hrs.”.

Over the past week, there have been several reports on when the result could be announced. However no date was confirmed officially until today. The rising tension among students has now been put to rest by this announcement of the board, over the exact date and time for the result.

Students who have appeared in the SSC supplementary July 2019 exam in Maharashtra can check their result tomorrow, at 1 pm.

Once the result is published at the promised date and time, students who took the test will be able to login with their roll number, and mother’s name to check it. Students are shown their name, seat number, division, subject codes, subject names, marks in each subject, total marks, and percentage.

The number of students to have appeared in the supplementary exam is anticipated to be more than in the previous years. This is attributed to the unfortunate dip observed in the pass percentage this year, that totalled at 77.1% for the revised course, and 32.32% for the old course.

The senior secondary certificate, class 10th exam was taken by 16,18,602 (sixteen lakh, eighteen thousand, six hundred and two) number of students. Whereas 16,39,862 (sixteen lakh, thirty nine thousand, eight hundred and sixty two) students had registered. A total of 12,47,903 (twelve lakh, forty seven thousand, nine hundred and three) had passed. For perspective, it may be noted that national level board CBSE had 17,74,299 registered students in class 10 this time. 17,61,078 students had appeared in the CBSE board class 10 exams.

Every year the Maharashtra Board conducts class 10th (SSC) exams in March, and class 12th (HSC) exams in February-March. Thereafter it conducts supplementary exams in July-August.