IIT Council is the top decision-making body for the Indian Institute of Technologies (IITs). On August 21, 2018, this council is up for a big discussion. There are several proposals that will be discussed. However, the biggest one which is coming up is the scrapping of JEE Advanced and only using JEE Main as admission tests for IIT admissions. The other proposal which is second in line is that allowing students to choose the IIT campus of their choice during admissions but not the course. Now, are these ideas feasible? Changing the entire scenario of the IIT intakes – this is going to take a lot of brainstorming and analysis on the behalf of the IIT council.

The decisions will not be easy and will take much much time in the coming future to be implemented if the IIT council finds these ideas feasible. The IIT Council is headed by the human resource development minister.

Proposal 1: Scrapping the advanced test under the Joint Entrance Examination (JEE), passing which is a prerequisite for admission to the 23 IITs.

Proposal 2: A student will be allowed to choose the campus of his or her choice and not the course at the time of seeking admission. This proposal has been submitted to the MHRD by two different IITs.

What do these proposals suggest?

This proposal suggests the following – 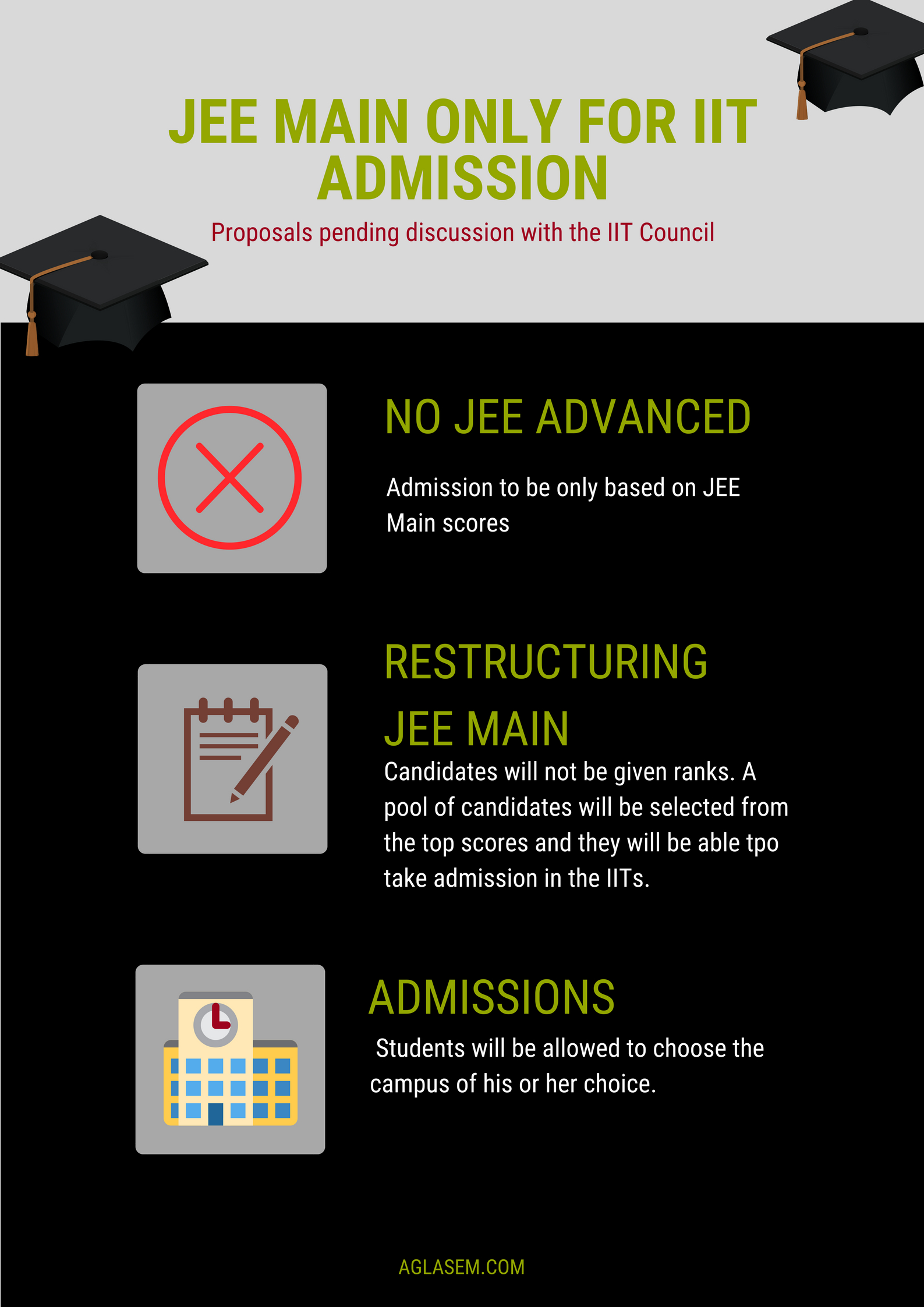 This is a huge one. The logic is to introduce a one test admission system. There will be no second level test or interview. Only one uniform test for all the competing candidates. This idea aims at taking off pressures from the candidates.

Two of the IITs, which are yet not identified, have submitted this proposal to allow the students to choose the IIT campus of their choice but not the course.

What these proposals tend to solve?

There is too much pressure for the candidates to take the board exam, then JEE Main and then again JEE Advanced. The high-end coaching centres are thus earning a lot of profit out of this which is morally wrong. Many believe that candidates who do not achieve the desired ranks are demotivated. Many are exhausted after extensive coaching and entrance exams. No ranks will ensure those hardworking candidates are treated as equals in their engineering campuses.

A few of the IITs have already opposed the idea, saying that allowing the candidates to choose the campus and not the course is unfair. They believe that students will opt for the older, more established IITs if given a choice.

It has also been noted that each year, as many as 10 lakh students go through many years of preparation and extensive pressure, in order to achieve a fine selection of about 5,000 students, to the top IITs. This is highly unfair.

Summarising all the above proposal to make JEE Main a single examination for IIt admission and eliminating JEE Advanced is to relieve pressure off the candidates and to make the admission system as fair as possible. So the questions that arise are – Is it unfair right now? Is it a lot of pressure for the candidates who have been giving 2 examinations for IIT admissions till date? Will this increase or decrease the quality of future engineers? Well, all these will depend on an analysis of years of data and a lot of speculations.

Lets us hear you, do you think doing away with ranking in JEE Main and scrapping JEE Advanced will be beneficial. Are you with the change or against it? Do comment below and tell us.