Home » GPSC Postpones All Prelims and Mains Examination; New Dates to be Released after June 01

GPSC Postpones All Prelims and Mains Examination; New Dates to be Released after June 01

GPSC postpones all the exams scheduled to be held till May 31, 2020. Check the Official Notification Here. 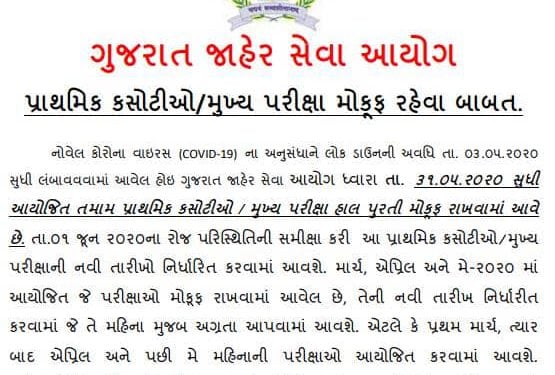 Gujarat Public Service Commission in its recent notification has postponed all the preliminary and mains examination that was scheduled up to May 31, 2020. This decision was taken, due to the extension of the lockdown period to May 03, 2020. The new dates for GPSC examinations will be decided after June 01, 2020, after reviewing the situation of the state. GPSC will release updated notification with new dates of the exam at gpsc.gujarat.gov.in. Candidates are advised to regularly visit the official website of GPSC to remain updated.

Check the official notification regarding postponement of all the Prelims and Mains Exams by GPSC.

Before releasing the latest notification, GPSC has already postponed a few examinations, that was planned in the month of March, and April 2020. The exam of GPSC State Tax inspector that was scheduled on April 26, 2020, was postponed due to lockdown. Also, the examination for GPSC Police Inspector exam which was scheduled to be held on March 22, 2020, to March 29, 2020, and on April 12, 2020, is also suspended. The official notification for the same was released online.

The schedule of all the preliminary and main exam will remain the same. This means that the exams that were planned to be held in March will be conducted first and then chronologically the exams planned to be held in April and May, will be organised. Once the new dates for postponed examinations are decided by GPSC, it will be conveyed to aspirants through another official notification.

After releasing the date, admit cards of the particular exams will be made available. Candidates can download GPSC admit cards from the official website, which is gpsc.gujarat.gov.in. However, the candidates should keep in mind that GPSC releases the admit card by through login. So, aspirants must keep their confirmation number ready to get their hall tickets. In case, applicants have misplaced their confirmation number, it can be retrieved by visiting the GPSC website only.

The examinations conducted by GPSC consists of 02 stages of the selection procedure, which are written exam/online exam and interview round. The first stage involves a preliminary exam and mains examination, which are postponed as of now. Once a candidate is able to qualify the first stage, he/she is called for the interview round. Separate hall tickets are released for each stage of the GPSC selection process.

Gujarat Service Public Commission holds great authority in conducting the state level examinations for the state of Gujarat. Not only does the commission conducts examination for admission to state services, but also makes an appointment to state’s civil services. Each year, GPSC advertises a large number of vacancies for several government profile posts.

Students Pour Their Suggestions On #BharatPadheOnline. What’s Yours?

SRM – IDEAL Allows Students to Choose Own Degree and Curriculum

SRM - IDEAL Allows Students to Choose Own Degree and Curriculum