Since 2013, the pass percentage of Tamil Nadu was just increasing. Every year, the state was witnessing the growth of the students. But this year, the trend got broken in the result of Tami Nadu. 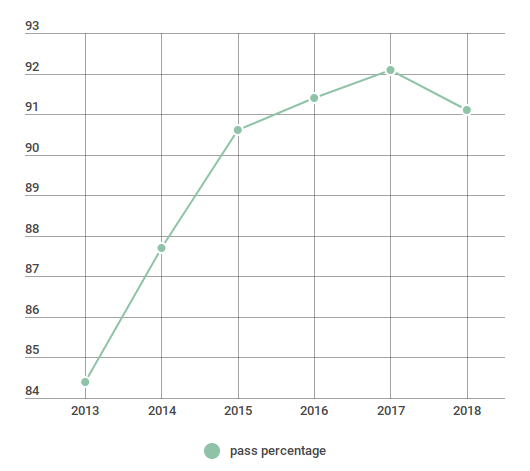 So, it is clear that from past five years, there was a huge increment in the pass percentage of class 12 but this year, the tendency got changed.

Reason for the Drop-in pass percentage?

According to the Education experts, the reason behind the fall in the pass percentage is that nowadays, the students are doing the preparation of many entrance exams like JEE or NEET. So, they are not able to be truly focused on the board exams.

Also, School Education Minister KA Sengottaiyan admitted that the question paper of this year was a bit tough than the last year. The students find it more difficult. He also mentioned that the previous year’s question papers were framed by taking care of the students so that they would handle entrance tests better in the future. Further, he added that there were total  6,754 schools from which the students took part in the exams and in those schools, around 1,907 schools had secured a 100% pass percentage.

The board conducted the exams of HSC from March 01 to April 04, 2018 and over 9.07 lakh students enrolled in the exams of Tamil Nadu Board.

In addition, it is also important to know that Virudhunagar district topped among all the district of Tamil Nadu by securing the total pass percentage of 97%. After that, Erode got the second place having 96.3% followed by Tirupur (96.1%). The least pass percentage was of Villupuram i.e. 83.35%.

More than 40% of students secured 700 marks. There is not only drop in pass percentage but also, the number of students who appeared for the exams were less than the last year. In 2017, 9.33 lakh students enrolled in the exams while this year the number was 9.07 lakh.

Tamil Nadu Education Department was established about 100 years ago. The board was established to conduct examination for the HSC and the SSC during the British era. Later, after Independence, it was formed in 1978 as a separate department to monitor and regulate secondary school education in the state. Tamil Nadu Board conducts yearly examinations to evaluate the academic performance of students through 12th Board Examination and 10th Board Examination. The board used to manage all the activities related to class 10 and 12. It prescribes the syllabus for the students, conducts the exams and then declares the result for the same.