The list of Armed Force Category- Priority-V has been released on July 15, 2019 by the University of Delhi. The list was released on the official website of Delhi University, which is, du.ac.in. The name of the candidates that are mentioned in the list are provided provisional admission to the UG merit-based courses in the colleges mentioned against their names. 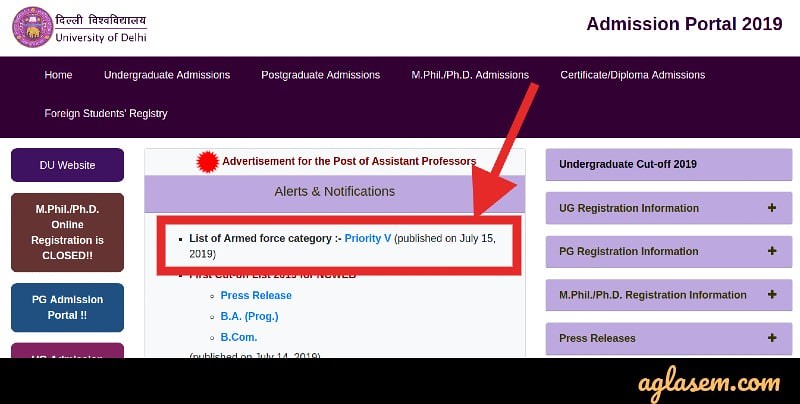 The list contains the Registration number, candidate’s name, course allotted and college allotted. The applicants shall take out the print of assigned college through their dashboard. Candidates are required to report to the college for admissions from July 15-16, 2019.

In the UG courses of DU, 5% of seats are reserved for applicants under the CW category, course-wise in all colleges. Admission is offered to the Children/Widows of Personnel of the Armed Forces (Priority I-IX) and Para-Military Personnel (Priority I-V).

The University of Delhi, or as it is informally known as Delhi University (DU), is one of the most popular choice amongst the students for admission in UG and PG courses. The University is located at New Delhi, India, and was founded in 1922 by an Act of the Central Legislative Assembly. The University of Delhi currently consists of 16 faculties and 86 departments distributed across its North and South campuses. It has around 77 affiliated colleges and 5 other institutes with an enrollment of over 132,000 regular students and 261,000 non-formal students.