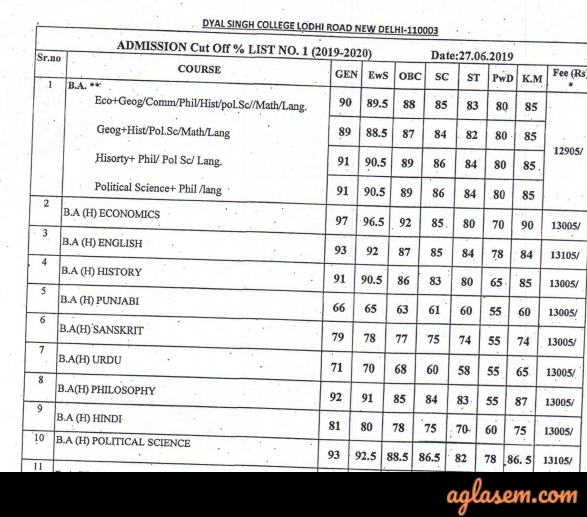 The candidates whose name is not in the first cutoff list of Dyal Singh college can wait for the second cutoff list to be out on July 04, 2019. The college is going to release the cutoff list until all the seats in the college is exhausted completely.

Candidates can check the cutoff lists of the colleges on the website of DU from June 28, 2019. However, many colleges have started to release the merit lists on their respective website from today, June 27, 2019, onwards.

This year a total of 3.68 lakh candidates have registered for DU UG Admissions 2019, of which the candidates who have completed their application process is 2.58 lakhs. 2.05 lakh applicants belong to the CBSE boards alone. More female candidates have applied for admission this year as compared to the males. However, the total number of registrations have dropped by around 20,000 from last year.

The most sought after courses in DU Admissions 2019 are BA English, followed by BA Political science, BA Programme, BA Economics, BA History, and others.

Delhi University is known as being one of the most reputed University of the Nation. In 1922, when the university was established, there were only three colleges namely, St. Stephens, Hindu, and Ramjas with two faculties of arts and science. Presently, there are 16 faculties, 90 colleges, and 87 departments. From this year, the National Testing Agency (NTA) will be conducting the entrance test for the DU courses where the admission is based on students qualifying the entrance exam – DUET 2019.