CTET To Continue Being In 20 Languages: Prakash Javadekar Central Teacher Eligibility Test (CTET) to be held in 20 languages like earlier. Prakash Javadekar proclaimed that CTET will be conducted in 20 Indian languages as earlier on Monday evening during a press conference in New Delhi.

After a criticism of CBSE’s decision to remove 17 languages including Tamil, Malayalam, Telugu, Kannada, Gujarati, and Bengali from the list of options for CTET, Parkash Javadekar the Union HRD Minister of India directed CBSE to continue CTET in 20 Indian languages.  The HRD minister tweeted from his Twitter account after a press conference in New Delhi on June 18, 2018.

According to CBSE, this exam would henceforth be held only in English, Hindi, and Sanskrit, and not in regional languages. As per the early decision of CBSE force the aspirants of CTET to choose only two languages from Hindi, English, and Sanskrit. But this decision will likely to put candidates from Tamil Nadu and many other States in a position of disadvantage.

“This is such a criminal waste of talent.” Kanimozhi Said after CBSE’s decision.

Kanimohi is a Member of Parliament, representing Tamil Nadu in the Rajya Sabha. She added on this, A CBSE student with the mother tongue of regional language will be put on deprivation without teachers in regional languages. This is to force students to study only three languages, this will be a great disadvantage for students as well as their futures, and this will transform into the battle of languages. 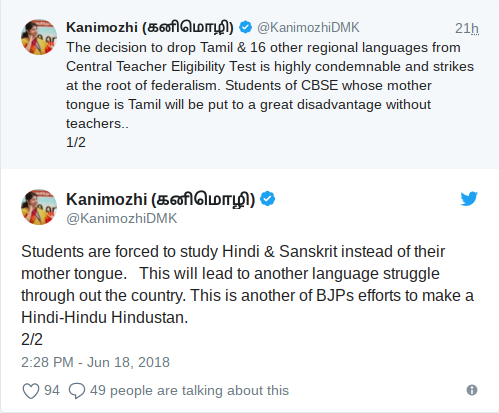 The purpose of CTET is to check the eligibility of a candidate as a teacher. TET was introduced by the Government of India in order to improve standards in teaching. So to improve the teaching standard how it could be improved without the knowledge of mother tongue. So the interruption of the HRD minister Prakash Javadekar is the subsequent result of these types of uproar tweets on twitter.

However, CBSE had decided to hold the exam in only three languages (Hindi, English, and Sanskrit) as there was a direction from the court that the test must be carried out quickly. But now, Javadekar’s statement has given the relief to CTET aspirants.

After the direction from the court, CBSE will hold the CTET on September 16, 2018, in this context the Application Form for CTET will be released on June 22, 2018. The aspirants of CTET should check them eligibility for CTET prior to filling the application form.