Odisha board is all set to declare Class 12th Science result 2020. Students from Arts & Commerce stream will have to wait some more as there is no official date for declaration of CHSE Odisha 12th Arts & Commerce Result 2020. 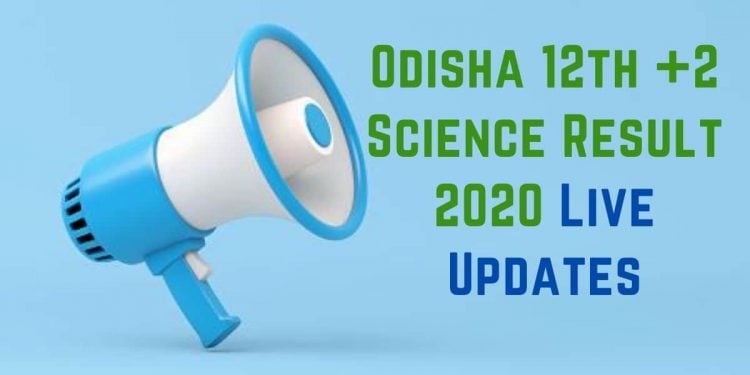 For the remaining subject papers, the state government has come up with a special assessment scheme. Students who have appeared in more than three papers, then an average mark will be calculated based on the best three subjects he/she has appeared for. The average mark will then be awarded in the pending subjects. Likewise, if a student has appeared in three subjects, he/she will be marked on the basis of two best performing papers.

This year, a total of 70.21 per cent students cleared the class 12 Science exam this year. In comparison to last year, the pass percentage has marginally dropped.

As per the media reports, the results for Arts and Commerce stream is expected to be announced by August 15, 2020.

Other than the official website, students can also get their 12th Science result by SMS. To get the class 12th result on your mobile phone, enter the following message – RESULT<space>OR12<space>ROLL NUMBER, and send it to 56263.

In order to secure 1st division, students will need to secure at least 60% of marks to have passed in class 12th exam.

Visit the official website of the Odisha board. To check the result, on the homepage of the website, click on the relevant link for class 12th science result. Next, log in using roll number or registration number as mentioned on the admit card. Click on the submit button after which the result is displayed on the screen.

10:11 AM – Keep documents ready to check the result

The plus 2 Science result will be available at 12:30 PM. Students will be able to check their result at orissaresults.nic.in. If the official website does not load, students can also view their result at private websites like indiaresults.com or examresults.net.

Nearly a lakh candidate who had appeared in the Council for Higher Secondary Education (CHSE) class 12 Science exam will be able to view their result today. Education Minister Samir Ranjan Dash will announce the result in a press conference after which it will be displayed on the website as well.

In the Odisha board class 10 result released earlier, a total of 78.76 per cent students passed the exam successfully. The girls outperformed boys securing a pass percentage of 81.98 per cent, while the pass percentage of boys recorded at 77.80 per cent.

Last year, the plus 2 Science result was declared in June, and a total of 72 per cent students became successful. This year, the result declaration for both 10th and 12th has been delayed due to lockdown.

1500 Plus Vacancies Out for SSB Constables Recruitment, Get Details @ssbrectt.gov.in