Latest tweets from the CBSE's official Twitter handle i.e. CBSE HQ has indicated that the results of Junior Assistant & other post recruitment exam is under process and can be expected to release soon 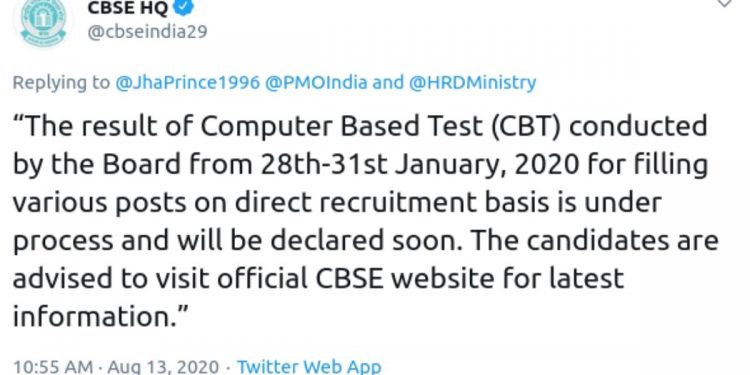 CBSE HQ tweeted earlier yesterday that the results of the Junior Assistant recruitment exam that was held from January 28 to 31, 2020 are expected to be announced soon. CBSE HQ is the official Twitter handle of the Central Board of Secondary Education in India. The social media announcement came in the midst of widespread speculations about when the results are going to be declared by the Board. However, CBSE has not commented on any exact date as on when the results are going to be declared. Candidates who appeared for the Computer-Based Test conducted for recruitment to various posts on direct recruitment basis are encouraged to keep checking the official webpage of CBSE i.e. cbse.nic.in in order to get the latest updates about the release of the CBSE Junior Assistant Recruitment Result 2020.

CBSE has tweeted about their diligent efforts to evaluate the candidate’s responses in the CBT and release the final merit list of candidates selected for recruitment. The tweet read “The result of Computer Based Test (CBT) conducted by the Board from 28th-31st January 2020 for filling various posts on direct recruitment basis is under process and will be declared soon“. It cannot be however speculated as to when the results of the exam can be expected to release. In response to the CBSE’s tweet, the Twitterati has responded in scepticism. Candidates have been waiting eagerly for the results to be released since the exam was concluded in January 2020. However, the answer keys for the exam have been published by the Board at the official website.

Candidates who have appeared in the exam can check the answer keys of the CBSE Junior Assistant and Other Post recruitment 2020 from the official website. The answer keys for the examination of each post are available separately through the official notification. Candidates can download them in their own interest to speculate their expected score. However, CBSE is deemed to implement marks normalization methods as the exam was conducted in multiple shifts. Candidates are advised to visit the official website regularly to get the latest information about the status of the recruitment.