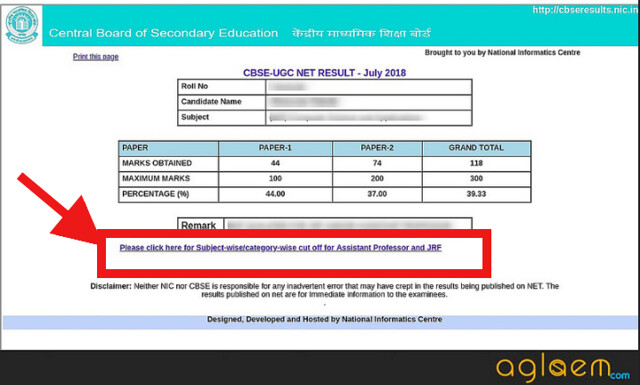 Before knowing the reason about the decrement of cut off marks the candidates should look for the process of checking the result.

Process to Chcek the Result

A new page will open with some text field.

Candiadtes ahve to enter the application number, roll number, and date of birth.

After entering the details the candidate will get there result as shown above.

The reasons behind the Low Cut off

After the conduction of the exam, many students made the complaint about the lengthy paper and less time for attempting the entire paper. This year CBSE made some huge changes in the paper pattern and the duration of the exam. It cut down the exam duration by 15 minutes of paper I, the earlier paper I had to be completed in 75 minutes, but now onwards the limit is 60 minutes.

The qualified candidates can go for the lectureship or they can apply for the Junior Research Fellow. But they should look at age limitation. UGC made changes in that. The highest age limit is now 30 years, which was 28 year earlier.

The candidates who are not able to crack the exam, do not get disheartened they can apply the next UGC NET exam which will hold on Dec 02, 2018 onwards. They can apply form September 01 to 30, 2018. At NTA’s official website.

This was the last time when CBSE conducted the UGC NET on behalf of University Grant Commission (UGC). From this time onward National Testing Agency (NTA) will conduct the exam. This could be the turning point for the National Eligibility Test. Even UGC NET 2018 Dec will be the first exam organized by the NTA.

Telangana HC Postpones TS EAMCET, ICET, and other CETs in the state