Indian Council of Agricultural Research (ICAR) is giving a chance to candidates to update their exam centres. This facility will remain open at icarexam.net until 5 August 2018 midnight. After that, ICAR Re Exam Admit Card 2018 will be issued.

The re-examination for the All India Entrance Examination for various courses such as UG, PG, and Ph.D. will be held on 18 and 19 August 2018 across 56 exam centers all over the country. The Indian Council of Agricultural Research has announced the final dates for the academic session 2018-2019. Only those students who had applied earlier for the exams will be able to appear for the re-exam. Through these examinations, the students will get admission to undergraduate, postgraduate and doctorate courses in the study of Agriculture. It is being notified that no new applications will be accepted by ICAR. 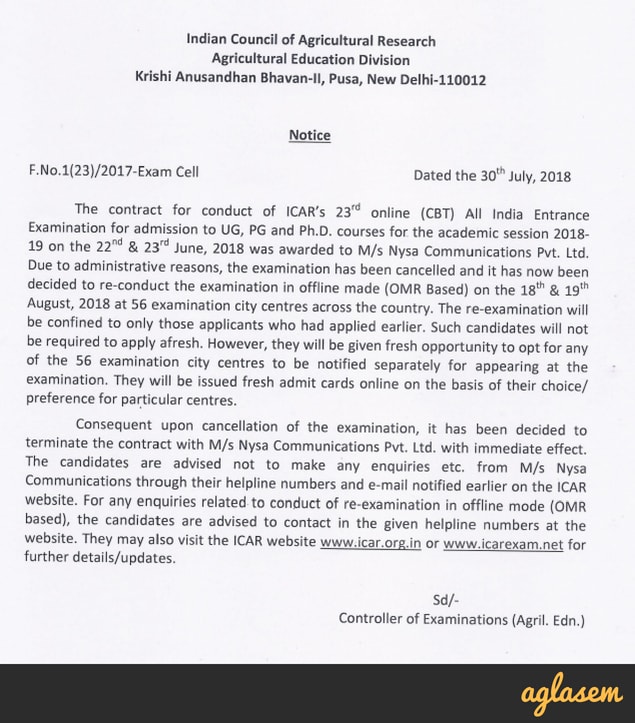 Earlier the students were preparing for the exams to be conducted in the CBT (Computer Based Test) mode. But now, the examination is scheduled to be held in offline mode. It is highly advised that these days the students must visit the official websites icar.org.in and aieea.net for further details about the ICAR AIEEA 2018 UG, PG and Doctorate level examinations.

Since this decision, the students have been discussing the changes that this change of decision will bring along. As according to the updates by the ICAR, only the exam mode has been changed and the rest will remain the same. But, the students again have to chose the exam centre.

The decision taken now is in continuation of the earlier released notice on the official website in which the Indian Council of Agricultural Research Krishi Anusandhan informed everyone that it has decided to cancel the ICAR’s 23rd online All India Entrance Exam (CBT) for the UG, ICAR AIEEA 2018 PG and Ph.D. courses. This notification was released by ICAR on 12 July 2018 The decision was taken because of some administrative reasons. Check the earlier released official notification. 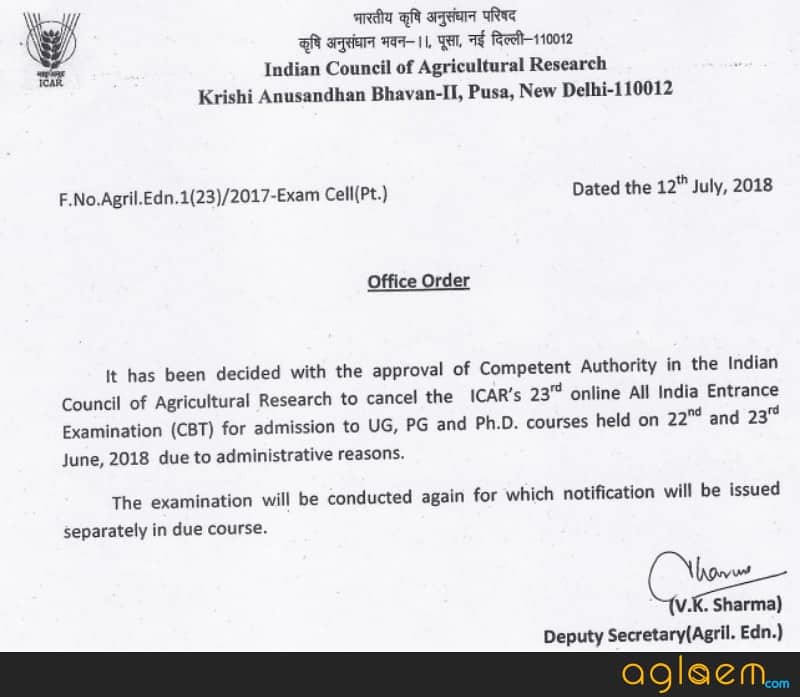 The decision was taken with the approval of the competent authorities and the reason for suddenly changing the mode of examination from the Computer based Test to Pen and Paper mode is said to be the technical difficulties which were faced by the students.

The re-examination decision was taken by the Madras High Court because of the technical Glitches faced by the students. Many allegations were put in front of ICAR by the students and their parents claiming that major technical glitches occurred recurrently. This made the Madras High Court give the orders to cancel the result. As a result, the exam is rescheduled and this time, the exam will be conducted in offline test i.e the OMR based test.