Central Board of Secondary Education (CBSE) conducted class 12th economics examination today, on March 26, 2018. While the students across the nation were appearing for the examination, News18India disclosed that the question paper has been leaked.

The news has only been reported by the said news channel. Sumit Awasthi, Deputy Managing Editor of the channel, took to Twitter to report the leak by re-tweeting a fellow report’s tweet. His tweet read, “Again!..! Oh! My God. Whats wrong with #CBSE. Now #Economics paper is leaked…” 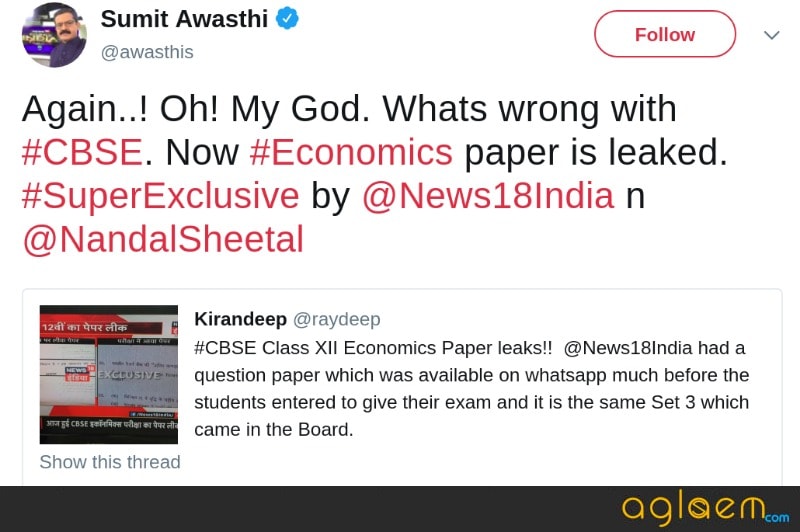 The channel also revealed that the paper was leaked on whatsapp, way before the students entered the exam hall. The question paper which the news channel found has the same Set 3, as that in the actual examination.

Insofar, no other newspaper or media house has covered the news yet. Students around the nation are using numerous social media platform to confirm whether the paper has been leaked or not. Few blog newspapers are reporting the leak but there is no solid proof of it yet.

If the report is true then this is not something that has happened for the first time. On March 15, 2018, the Board conducted Accountancy paper and the report of leak spread quickly. Deputy Chief Minister of Delhi, Manish Sisodia, confirmed the leak and asked CBSE to look into the matter. On the other hand, CBSE denied all the allegation and informed that all the seals were intact in all the exam centers. The leak is being investigated now.

The report of the paper leak has brought a wave of disappointment among the students because they were quite satisfied with their performance in the exam. The question paper was direct and easy. No question in the exam was out of syllabus and those who practiced from NCERT were able to easily get the answers of all the answers.

Not only students but even teachers agreed that the question paper was moderate in level of difficulty. As per some, this is the easiest economics paper in 5 years. Theory, as well as, numerical were from the course book and no question required out of the box thinking.

The only section in which candidates had a little difficult was macroeconomics, other than that all question paper was a boon for the candidates.

CBSE class 12th boards examination are ending on April 13, 2018. This year, 11,86,306 students registered for class 12th examination. The exams are being held across the nation, in 4,138 centers across India and in 71 centers outside the nation. The Board is expected to announce the CBSE Class 12th Result in the month of May 2018. It will be announced online, at cbse.nic.in.

We hope that there was no leak but if it was, then it is a shameful matter for CBSE. What do you think has happened? Was the CBSE Class 12th Economics Paper leaked or not? Also, if you received any WhatsApp image of the question paper then do let us know.

Kerala Plus One Improvement Result 2020 Announced for Dec Exam at keralaresults.nic.in