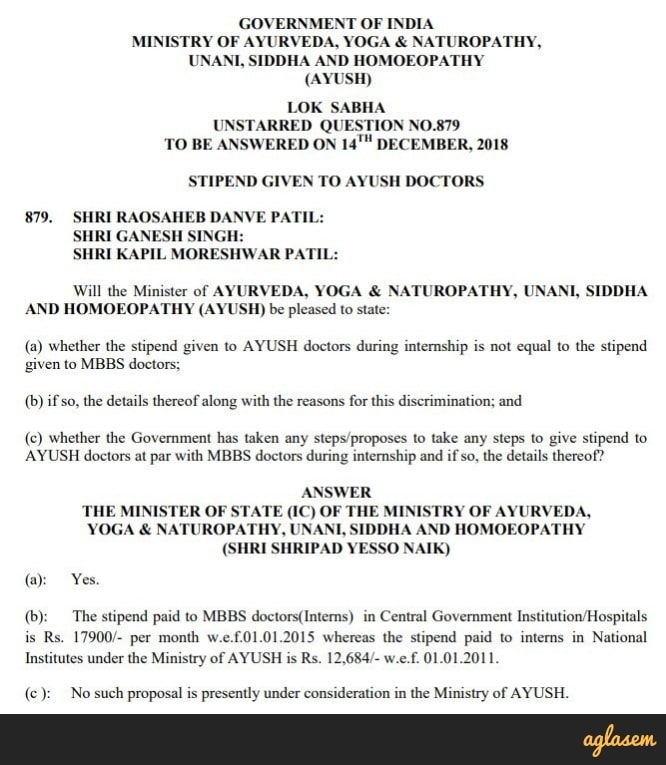 A question was raised during ongoing Lok Sabha sessions regarding this existing discrimination and the concerned ministry was asked to answer about whether the Government has taken any steps/proposes to take any steps to give stipend to AYUSH doctors at par with MBBS doctors during internship and if so, the details thereof.

Earlier this year, 450 AYUSH medical officers and 100 MBBS officers were engaged in Rashtriya Bal Swasthya Karyakram. It was alleged that the pay being given to AYUSH doctors was less than that of MBBS doctors. The government was then urged to revise their pay scales as per recommendations of the 10th Pay Revision Commission.

In May, students of Shri Krishna AYUSH University raised their voices over being paid Rs 4500 only as internship stipend. Post it, the state government took the decision to increase the stipend to Rs 10000.

Internship stipend vary from state to state also; and this exists for MBBS as well as AYUSH doctors. 2700 Medical interns had protested in Maharashtra in June this year to demand a 40% increment in their stipend. They alleged that their stipend was lower than that of states like Chhattisgarh, Kerala, Uttarakhand, Uttar Pradesh, West Bengal.