The All India Institute of Medical Sciences (AIIMS), New Delhi has published a notice in which it has been stated that the examination for the recruitment of All India Institute Of Medical Sciences (AIIMS) Nursing officer 2018 has been postponed for AIIMS Bhopal, Jodhpur, Patna, and Raipur. AIIMS official website has released the notification in this regard informing the students about the postponement of the exam which was scheduled to be conducted on December 07, 2018. The official notification got released on the website of AIIMS on October 12, 2018. 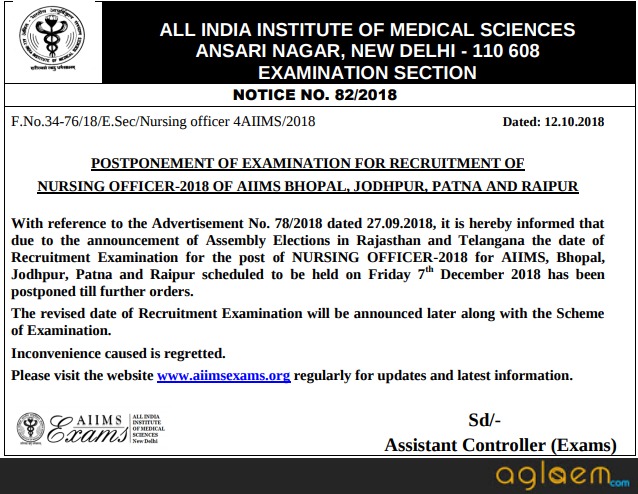 The reason for the postponement of the exam has been stated due to the announcement of Assembly Elections in Rajasthan and Telangana. The candidates have also been told that the revised date will be informed to the candidates. Thus, it is suggested that till the next notice releases, the candidates must make sure to keep their preparation above the mark. Also, alongside the revised date of the recruitment examination, the scheme of examination will also be notified.

The online registration for the Nursing Office Recruitment 2018 has been started from October 08 till 29, 2018. It is advised to the aspirants to complete the application process before the last date. At the time of the online application, the candidates also have to give preference for the AIIMS Bhopal, Jodhpur, Patna, Raipur for subsequent allotment of AIIMS based on their choice and merit. To submit the application form, the aspirants have to pay an amount of Rs.1500 /- in case of General / OBC Candidates, Rs. 1200/- in case of SC/ST Candidates. However, Persons with Benchmark Disabilities are exempted from paying the application fee. The fee can be paid through Debit card/ Credit Card/ Net Banking.

The AIIMS New Delhi will conduct the Online (Computer Based) Test on behalf of AIIMS Bhopal, Jodhpur, Patna, and Raipur. After the CBT is conducted, the candidates will be shortlisted for the next round, which is document verification. The result for the Computer-based test will be published online at the AIIMS, New Delhi official website. The Candidates might get their result in the PDF format which the candidates will be able to access by using their login credentials on the official website.