Aspirants who desire to take admission into the prestigious Armed Forces Medical College (AFMC), Pune through NEET 2018 Result now have a reason to rejoice. In a recent order, the institute has been asked to increase the intake on its seat.

A recent decision by Central Government will now increase the seat at AFMC to 150. Previously, the number of seats was 140. This order will be valid for the 2018-19 session for the MBBS course. 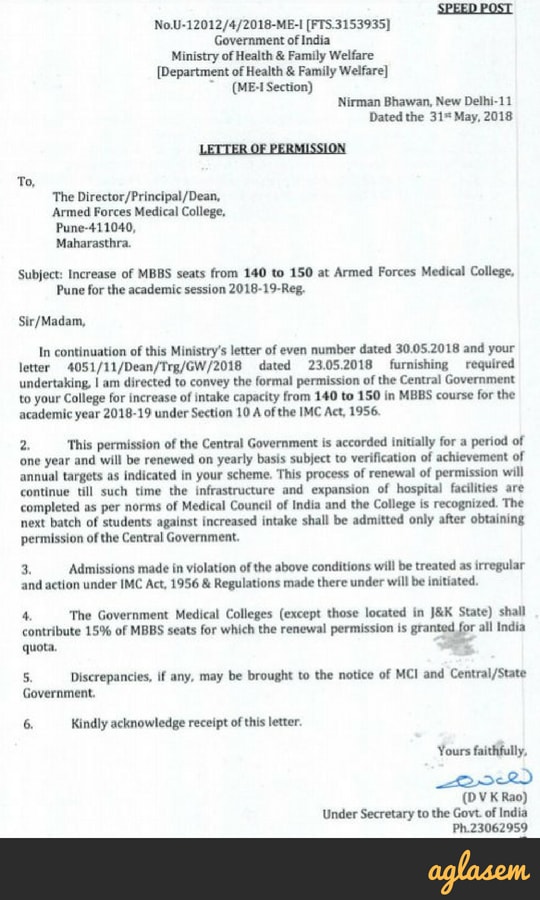 He informed that all the required clearances from regulatory bodies for the enhanced intake will soon be in place. All the additional requirements such as the infrastructure and the faculty and human resource (HR) would also be made available soon.

The Central government has put some guidelines for the admission procedure. This increase of the seats will be for a period of 1 year. This decision will be renewed on the yearly basis, under some certain conditions.

The renewal will be on the basis of verification of achievement. This will continue unless and until infrastructure and the expansion of the hospital is completed as per the Medical Council of India and the college is recognized.

The admission of the students to the medical college will be after the required permission has been taken by the Central Government against the increased seat intake.

It might also be possible that the medical college might be granted the autonomous state. A decision in this regard will be conveyed soon by the official authorities.

The Armed Forces Medical College (AFMC) is located in Pune, Maharashtra. The college is managed by the Indian Armed Forces.

It was Established in May 1948 after World War II on the recommendation of the BC Roy Committee. The AFMC undergraduate wing was established on 4 August 1962, which is celebrated annually as AFMC Day by its alumni across the globe.

The institution primarily imparts training to medical undergraduates and postgraduates, dental postgraduates, nursing cadets and paramedical staff. Patient care forms an integral part of its training curriculum and the attached hospitals benefit from the expertise available at AFMC. The institution is responsible for providing the entire pool of specialists and super specialists to the Armed Forces. The college is also involved in conducting research in various medical subjects as well as those aspects which would affect the morale and performance of the Armed Forces both in war and peace.