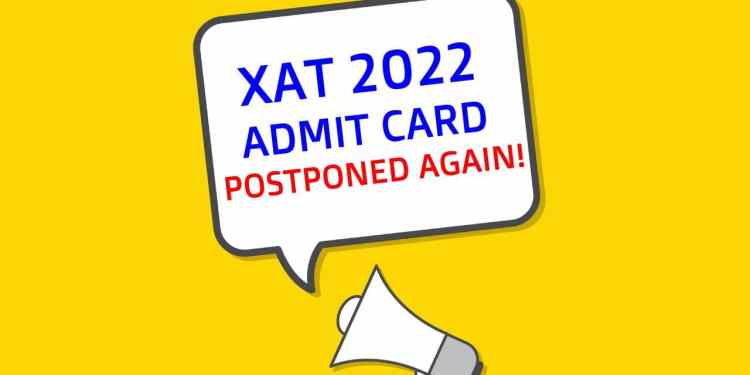 Xavier Aptitude Test (XAT) 2022 admit card release has been delayed by 2 days more days. While XLRI has not published any official notification regarding the delay on the official website xatonline.in, officials told this new date when asked about it in a ticket (candidates can raise ticket by logging into xatonline.in). This is for the second time the release of the admit card has been postponed. The XAT exam is scheduled to be conducted on January 2, 2022. With 10 days in hand, such delay in the release of the admit cards has raised doubts in the minds of candidates about whether exam date will be postponed or not, however till now, the exam date itself remains unchanged.

The XAT admit card was supposed to be released today. Today, in the morning, officials said over a call that they will be delaying the release (read complete story here – XAT 2022 Admit Card Likely To Be Delayed Again; Helpline Says Will Release on 24 December – Report). Upon contacting the helpline number available on the XAT website, the personnel on the other side intimated that the admit card will not be released today.

However, for final confirmation, official notice was awaited on the website.

After hours of wait, candidates reached out to the officials by raising queries at the candidate login. And finally they were told that once again, the hall ticket has been delayed. The release has been pushed back owing to certain unavoidable reasons. See the screenshot below for proof.

It is expected that an official notification regarding the same shall be made available soon.

XAT 2022 is the gateway for admission to XLRI and more than 160 institutions for MBA/PGDM courses. This year’s XAT exam will be conducted online through the computer-based format on January 2, 2022 (Sunday).

The computer-based XAT (Xavier Aptitude Test) is an online management entrance exam that grants candidates admission in prime institutions such as XLRI Jamshedpur, XIMB Bhubaneswar, SPJIMR Mumbai, IMT Ghaziabad, etc. This examination is conducted by XLRI Jamshedpur, which belongs to the same league as the most prestigious Indian IIMs. This year over one lakh candidates have registered to take the XAT exam.

Over the past few years, XAT  cut-offs have remained relatively stable for top colleges. At XLRI Jamshedpur, the cut-off for the BM program will likely remain at 96%, while the cut-off for the HRM program will likely remain at 94%. It is expected that the final XAT 2022 result will be released in the third week of January. XAT 2022 Exam is just the qualifying exam, and the Business School decides whether to select a candidate or not based on a series of processes.

UPSC CDS 2022 Syllabus in Hindi Released by Coaching Centers; Know Where to Check

UPSC CDS 2022 Syllabus in Hindi Released by Coaching Centers; Know Where to Check