Last Friday, the Uttar Pradesh Police Recruitment and Promotion Board (UPPRPB) released a notice, terminating all the rumors regarding re-test for UP Police Bharti 2018. The notice clearly denies that the examination held on June 18 and 19, 2018, will be conducted again. In last few days, UPPRPB came across numerous tittle-tattle and has cleared the air by issuing the notification below. 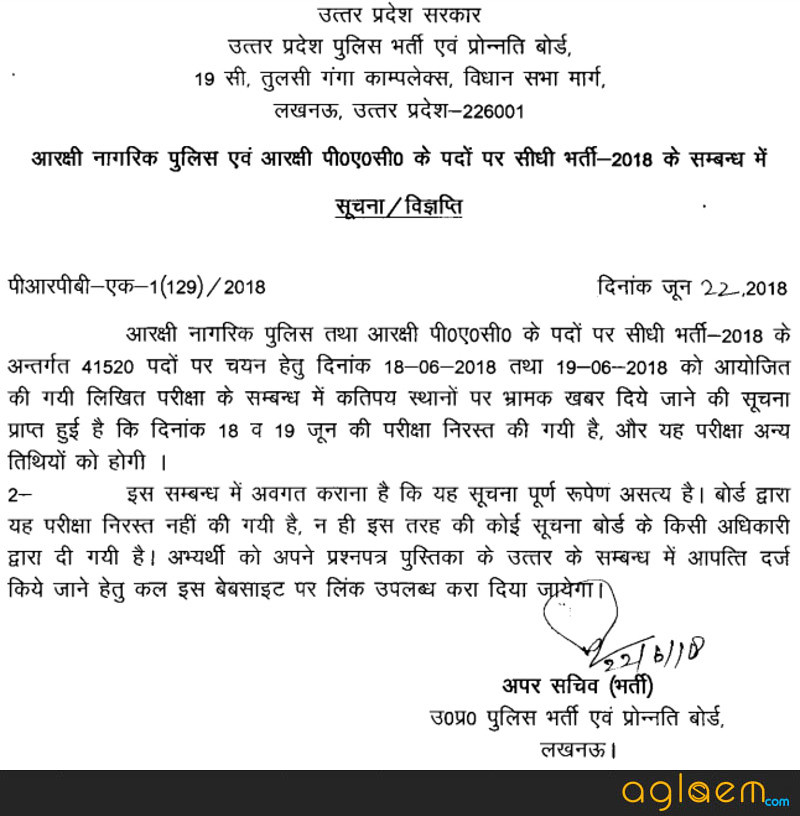 It all started with UPPRPB conducting an examination on June 18 and 19, 2018. The examination was held for the recruitment of Resident Citizen Police (RCP) and Reservoir Provincial Armed Constabulary (PAC), in 41250 vacancies. In few centers, the misleading news surfaced that, “The exam hold on June 18 &19, 2018 has been canceled, and exam will be held on different dates.”

The rumor created friction between the students, who frantically sought more information on the re-examination. Hence, the Board has to interrupt and resolve the matter.

Neither this examination has been cancelled by the board, nor any officer of board produced this type of news. – By UPPRPB.

Why has this happened and what is the actual matter? It began in Allahabad, Uttar Pradesh, where 03 people got caught while cheating in UP Police Constable Bharti exam on held June 18 & 19, 2018. Police recovered a spy mike and some electronic devices which were used to cheat in an exam, from the culprits. Whereas, in another case again in Allahabad UP Special Task Force took 16 people to custody for doing the forgery in the exam.

Allahabad SP Nitin Tiwari shared information about the matter, as per the information one of these (culprits) clicked the image of question paper during the exam and send it to an outsider. The person on the other end spoke out the answer through the spy mikes.

The third case of forgery in the exam was notified in Noida. On the second day of the exam, UP Police arrested an anonymous person who came to attempt the exam instead of the actual candidate. The accused stated that he just wants to help his brother to crack the exam by forging the identity. The incident came to light when invigilator noticed the difference between the candidate’s photograph and the person appeared for the exam. Instantly, the invigilator reported the matter to the Principal of the school where the exam was held. Later, on-duty officer arrested malefactor.

All of these reports lead to rumors that the exam will be conducted again but now the Board has made it clear that the exam will not be held again. Along with the notice, Board also invited the objections regarding UP Police Anser Key as well. The candidates can put their registration through the relevant link on the website. After observing the objections UPPRPB will release the result of the recruitment.