Telangana State Junior Panchayat Secretary Exam is rescheduled to be held on 10 Oct 2018. This has put many such candidates in a spot, whose RRB Group D exam is also falling on the same date.

A large number of candidates had applied in response to the notification no 2560 for 9355 vacancies of Junior Panchayat Secretary. For all the applicants, it is an important exam. Nevertheless the same applies to the Railway Group D exam that is being held after 5 years by the Indian Railways. No one would want to miss any of the rare chances to get a government job.

Initially, the date of exam (for TS Junior Panchayat Secretary) was 04 Oct 2018. Then on 19 Sep 2018, the Telangana Panchayat Raj Department announced that exam is being rescheduled to 10 Oct 2018. Both the dates, initial and new, clash with RRB Group D exam dates.

Although separate data is not available for the state of Telangana, however it can be assumed that a sizeable number of candidates have applied from Telangana too. There are high chances that a huge percentage of candidates, who have applied for TSPRI Junior Panchayat Secretary recruitment 2018, have also applied for RRB Group D.

Out of the 49 exam dates of RRB Group D, getting 10 Oct 2018 as one’s date of exam has just 2% chances. But for such 2% candidates, it is a decision to be made, that whether they wish to appear in the Junior Panchayat Secretary exam or the Railways Recruitment exam. 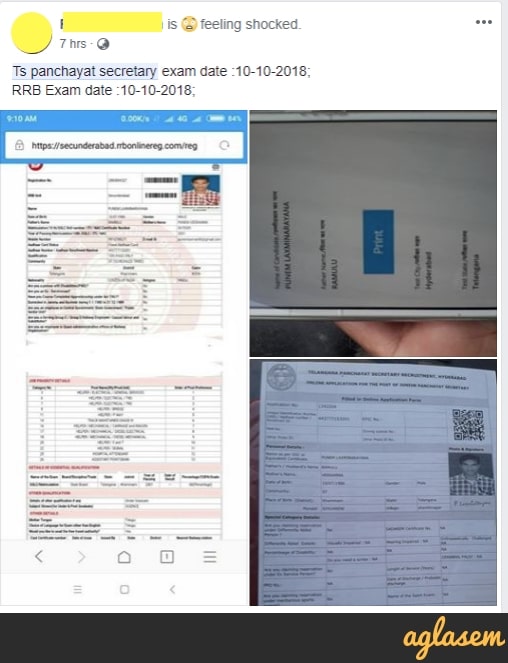 Availability of hall tickets for the TSPSC Junior Panchayat Secretary 2018 exam is anticipated this week. The commission usually releases hall tickets at least 7-10 days prior to exam. Therefore there are high chances of the hall ticket being issued around Oct 02 or 03, 2018.

The Government of Telangana had issued notification on 31 Aug 2018, and accepted online applications from 03 to 15 Sep 2018. Candidates who appear in the exam and get selected will be appointed to the post of Junior Panchayat Secretary, whose duties include responsibilities given by Telangana Panchayat Raj Act , and other responsibilities given by Government, Commissioner, PR&RE and District Collector from time to time. This is a district cadre post with monthly consolidated remuneration of Rs 15000.