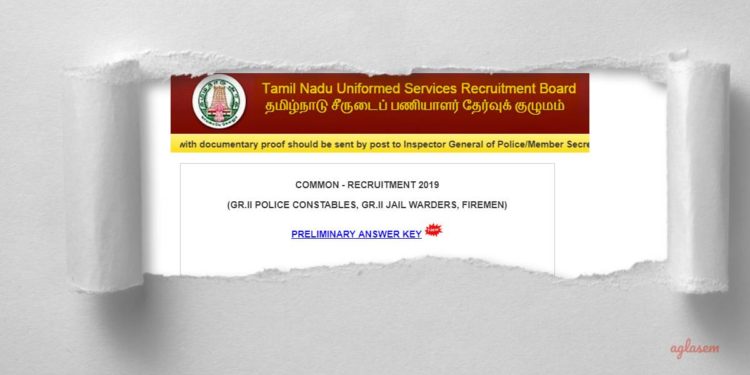 It was only the past Sunday that a common written examination was conducted in the state for this recruitment. In a record time, the board has released TNUSRB answer key 2019. To download the same, government job aspirants who appeared in the exam need to go to tnusrbonline.org and click the preliminary answer key link. This in turn opens a pdf file containing question number 1 to 80 answers for all sets namely A, B, C, and D.

The scrolling message on the official website reads, “Preliminary Answer Key for the written exam of Common Recruitment 2019 has been published. Any dispute/objection in Questions / Answers with documentary proof should be sent by post to Inspector General of Police/Member Secretary, TNUSRB, Old Commissioner office campus, Pantheon Road, Egmore, Chennai – 8, on or before 3/09/2019 @ 1800 Hrs.”

As instructed, candidates must compile their objection with proper evidence, and send it to the aforementioned address by prescribed deadline. Beyond that, objections are not liable to be considered by the board.

TNUSRB has not specified as to when the final answer key would be released, or when, thereafter, will the result be out. However looking at the quick release of answer key it is anticipated that final answer key as well as result will be announced shortly after September 3.

It has been reported that 71,915 candidates had appeared in the TNUSRB recruitment 2019 exam that was held on Sunday. Highest number of test takers were from Madurai, clocking 21,307 test takers at twenty eight centres. In the same district it was reported that 3,878 candidates were absent. Next highest number was recorded in Tirunelveli with 18,319 test takers, 3,577 absentees, at seventeen centres.

Virudhnagar district also saw high attendance with 12,277 participants in the exam.  Theni district had 8,412 test takers and 1,752 were absent at seven centres. Overall 7,166 candidates took the test in Ramanathapuram while 1,386 did not attend. Same number of candidates were recorded in Tuticorin. 5,680 Number of candidates appeared for the exam at Sivaganga, and 1,038 were recorded absent in eight centres.

Three arrests were made by Udayarpalayam police for impersonation. All of the candidates were reported to be engineering graduates, who charged between 1 to 1.5 lakh to take the test on behalf of someone else.