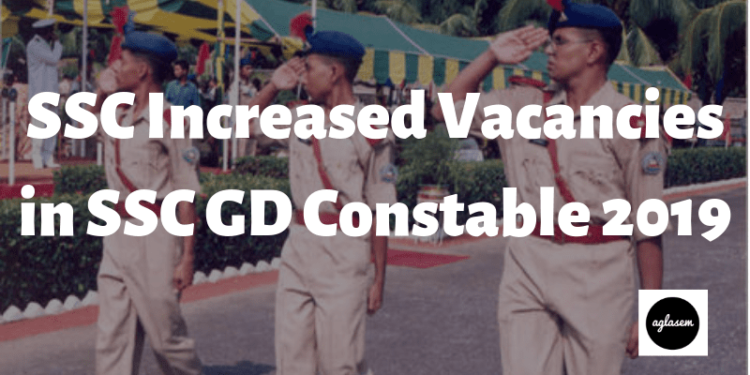 Staff Selection Commission (SSC) has increased the vacancies in SSC GD Constable Recruitment, by releasing a notice at ssc.nic.in. The Commission has notified about the vacancy increment on April 10, 2019. Now the aspirant of SSC GD will compete with each other against 58373 vacancies. The earlier vacancies on which the recruitment process was going on were 54953.

SSC will release the answer key in the form of login, the candidates have to enter the roll number and password for checking the answer key. At the time when the examination was going on, the many unofficial bodies complied the memory based answer key for SSC GD exam and shared over the social platforms.

At first, the tentative answer key will be released, on which the objection will be invited. The SSC will open the online window to check the answer key and raise the objections. For objecting the question the candidates have to pay the objection fee, which is Rs 100. The only mode for making the payment will be online apart from that no other mode will be available. The candidates will be provided a period of time, in which they will be allowed to submit their representations. After considering the Objections, the final answer key of SSC GD will be released at its official website.

Apart from that, the Commission has notified the date of SSC GD Result announcement, that will be done on May 31, 2019.

The SSC GD examination was held for 18 days in 54 shifts in all. There was a total of 297 venues at 125 cities in 31 states and Union Territories. For this examination, there was massive participation of 52,20,335 candidates, in which only 30,41,284 candidates appeared for the examination. These candidates are waiting for their result.

As the examination held in various shifts, so to address the variation of difficulty in all shifts, the SSC has decided to use the normalization of a score of the candidates.

After the announcement of CBT result, the qualifiers will be called for the Physical Efficiency Test, for this, they will be issued the admit card of PET/ PST.