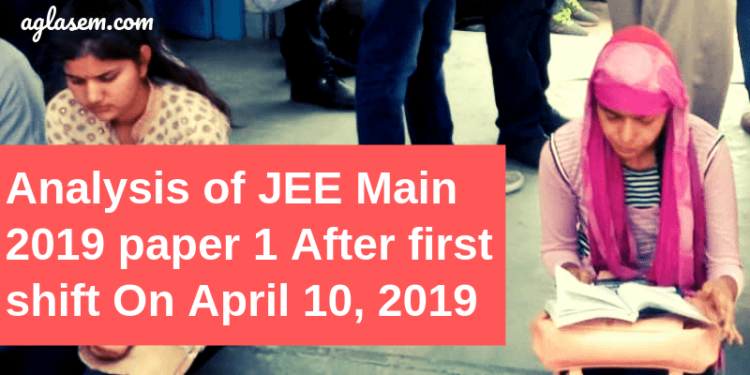 In this shift, the difficulty level of the January and the April section was same. Also, overall in this session, the weightage of class 12 was more than class 11. The candidates are expecting marks above 200. The overall exam analysis after shift 1 says that the paper was on the difficult end in this shift. Due to elections, there will be no exam on April 11, 2019.

In this shift, Mathematics was also difficult. Few candidates said that the exam was difficult. In Mathematics, the integration and limits questions were hard to solve.There were questions from statistics and probability, circles, trogonometr, and calculus.

Tip after shift 1 of April 10, 2019 exam: Keep basics clear and apply them wherever needed

As per the analysis of the past 2 days of paper 1, the exam was overall moderate in the difficulty level. There was no problem with the length of the paper. many candidates in the January session said that the paper was lengthy, and many could not complete the paper. However, in the April session, the paper was not much lengthy and the exam was comparatively easier.

NTA will be uploading the result of the exam over the official website for paper 1 by April 30, 2019. However, for paper 2 the result will be out by May 15, 2019. The cutoff of the exam will be declared with the result.

For more updates to stay connected to AglaSem news!