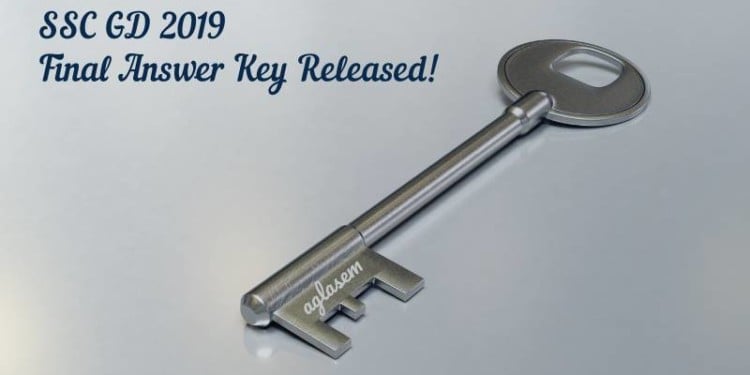 SSC today released the revised answer key of SSC GD Constable recruitment 2018-2019. The Staff Selection Commission has released a notification regarding uploading of final answer keys with link to download them. As per the notice, candidates can view and download revised answer key until 9th August.

In this one month time, candidates can login with user ID and password to generate their question paper and answer key. The same also contains their recorded responses. Revised answer key of SSC GD contains all 100 objective questions asked in the paper of that candidate. Incorrect options have a red cross against them, and right answers have a green tick. Chosen option is written along with question ID. However, issuance of this final answer key has no bearing upon issuance of admit card of SSC GD 2019 for PET, which is to be released by CAPFs.

There is no way to directly know how many answers have been changed. To do that, candidates have to compare the provisional answer key with the final version. If there are any changes, then it means that that question had been challenged by one or more candidates, and the Commission found it to be actually incorrect, and changed that answer.

In SSC’s own words, the final answer key has been published in order to have more transparency in the examination system. Now candidates know exactly where they gained marks and where they lost marks. It is as per the final revised version only that SSC has evaluated marks for candidates for the purpose of result of SSC GD 2019 that was announced on 21st June. Candidates were awarded 1 mark for every correct answer. No marks were deducted for incorrect answers. Marks so obtained were further revealed on 5th July.

Staff Selection Commission had conducted exam for GD Constable recruitment from 11th February to 11th March. Thereafter official answer key was released on 30th April. Candidates could submit challenges by paying a fee of Rs 100 until 5th May. Now the final answer key has been published after declaration of result.

Staff Selection Commission is the government organization that does recruitment for different Ministries and Departments of Govt of India and in subordinate offices. Various exams conducted by it include CGL, CHSL, GD, MTS, CPO, and others.

UP Board 10th Compartment Admit Card 2019 Available At School Login

UP Board 10th Compartment Admit Card 2019 Available At School Login