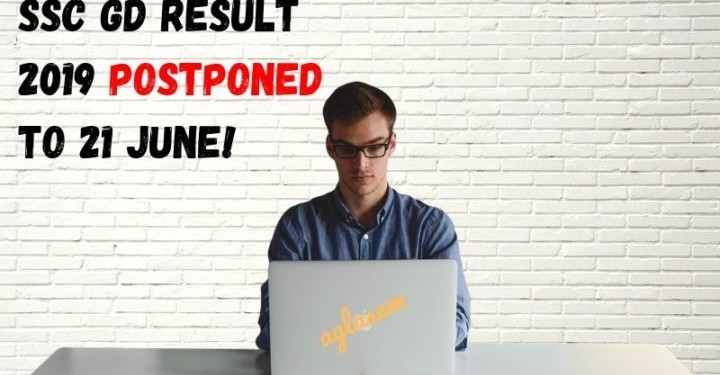 Staff Selection Commission has postponed announcement of SSC GD Result 2019. Now result will be announced on June 21, 2019, instead of May 31, 2019. This postponement of result by three weeks has caught more than 30 lakh job seekers by surprise since there have been no such recent events that could have caused this delay.

Status report of results are published by SSC from time to time at ssc.nic.in. They contain dates of result promised by SSC, as well as actual dates on which they are announced. Since March, four such status reports have been published. And up until now, all had mentioned that SSC GD Result 2019 will be announced on May 31, 2019. Now the latest one released today says that it will be announced on June 21, 2019.

The Constable (GD) in CAPFs, NIA, SSF and Rifleman (GD) in Assam Rifles Examination was held as computer based test over 18 days from February 11, 2019, to March 11, 2019, with 3 shifts every day. Overall 5220335 candidates had applied for the exam, and 3041284 had appeared. Since no reason has been proposed by SSC regarding delaying GD Constable Result, it is conjectured that the huge number of test takers could be the reason.

SSC had released answer key of SSC GD Constable 2019 exam on April 30, 2019. Thereafter candidates could submit objections until May 5, 2019. They had to pay Rs 100 per challenge. All test papers are checked on basis of final answer key composed considering objections of candidates.

Usually SSC results get delayed due to external factors such as protests, court cases. For example SSC Combined Graduate Level (CGL) 2017 was delayed by more than a year as the court hearings kept going on. There were allegations of paper leak after which SSC had recommended inquiry by CBI. On basis of it, several miscreants were caught and result of CGL was withheld.

Once computer based exams were introduced by SSC, initially technical problems such as server issues were highlighted. This caused SSC to conduct re-exam in some places. Then delays are caused by administrative reasons wherein exam dates get pushed to later dates. Another reason of delay arises when candidates are dissatisfied with question paper and answer key.

However in case of SSC GD, no such issues have come to light. Exams were held smoothly wherein 58.26% candidates were present. Overall 54 shifts of exams were held at 297 venues in 125 cities. Whatever reason may have been there, now SSC GD Result 2019 will be announced on new date only. It will be published at ssc.nic.in in form of a PDF file containing roll numbers of qualified candidates.

Staff Selection Commission (SSC) was founded in 1975. It functions directly under Government of India and is responsible for recruiting staff for different posts in different Ministries and Departments of Govt of India.