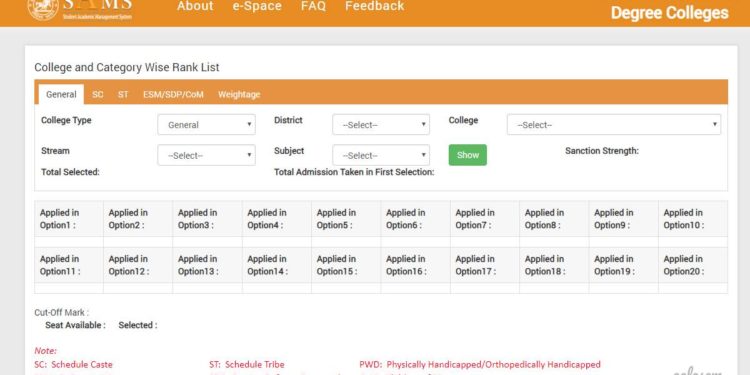 SAMS Odisha +3 merit list 2019 has been published at samsodisha.gov.in. Students of Odisha, who had applied for admission to degree colleges in Odisha can check the second selection list to know whether they have gotten admission or not. Also, cut off for each college and stream has been published. The whole admission process is online, thus making it easy for admission seekers to complete admission formalities in a short period of time.

There, students need to select college type, name of district, name of college, stream, and subject from drop down that appear on rank list display page. As soon as relevant details are selected, list of students who have been allotted a seat display along with cut off percentage, and seats available. For example, the cut off percentage for general candidates in Baba Panchalingeswar degree college in Balasore for History in Arts stream is 40.33%.

Students Academic Management System (SAMS) is the system in which students seek admission in +3 classes for arts, commerce, science streams including in sanskrit colleges. The whole process of admissions is online, and hence referred to as e-admission.

The system was established in the year 2009-10 for 60 junior colleges, and thereafter expanded its purview to 169 junior colleges of +2 level, and 53 degree colleges of +3 level in 2010-11. Then in 2011-12, its reach expanded to all junior colleges including self-financed colleges, and 162 degree colleges. It was in the year 2012-13 that junior, degree, autonomous colleges of Odisha came under SAMS. then vocational, sanskrit colleges were included in 2016-17. ITIs came under SAMS in 2017-18, and government, private ITI, sports and diploma institutions got included in 2018-19.

UKSSSC AAO Recruitment 2019 Notification out for 280 vacancies, Last date to apply is 19 September

UKSSSC AAO Recruitment 2019 Notification out for 280 vacancies, Last date to apply is 19 September