The RRB Group D Result 2018-2019 for CEN 02/2018 is awaited since February 2019. Yesterday, the Railway Board disclosed the date for declaring the result and now the time has also been informed. RRB is famous for changing the time of all the events. However, for now, the candidates can expect the result to be announced at 3:00 pm. 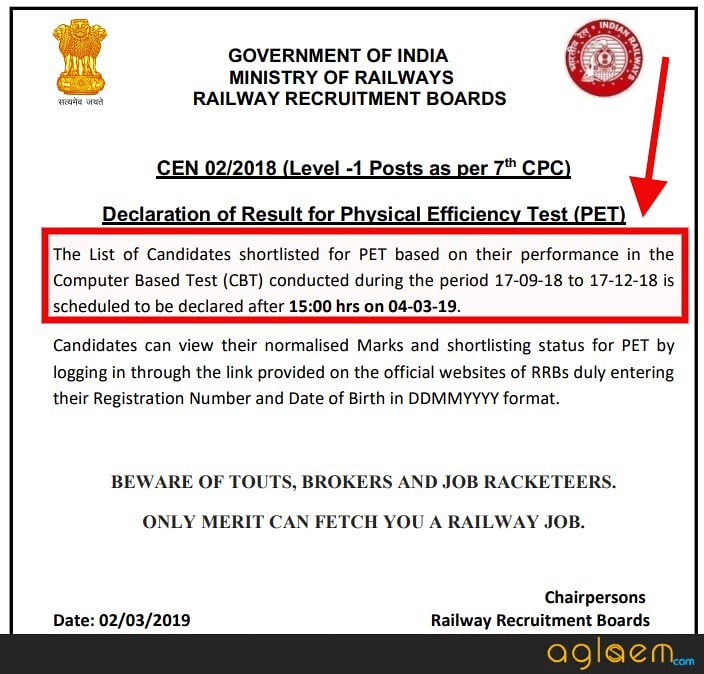 The result of RRB Group D 2019 will be announced on the official website of 21 RRBs. It will be available as pdf and the list of candidates shortlisted for PET will be mentioned on it. The names and roll numbers of only those candidates will be mentioned in the merit list who will qualify for PET round. The score of RRB Group D will be announced separately, through the login. To access it, user id and date of birth will be needed.

The RRB Group D result 2018 will be determined on the basis of cut off. Indian Railway defines RRB Group D cut off on the basis of various factors like the number of candidates, vacancies, level of difficulty, etc. The cut off for all the RRBs will also be announced with the result.

RRB is conducting the RRB Group D recruitment for 8 posts namely Track Maintainer / Trackman, Gateman, Pointsman, Helpers in Electrical, Helpers in Engineering, Helpers in Mechanical, Helpers in Signal and Telecommunication and Porters. There are 62907 vacancies under this recruitment. The selection of the candidates will be done through CBT, followed by PET and document verification round.

UP Board Class 10th, 12th Results Expected To Be Released By April; Check Here