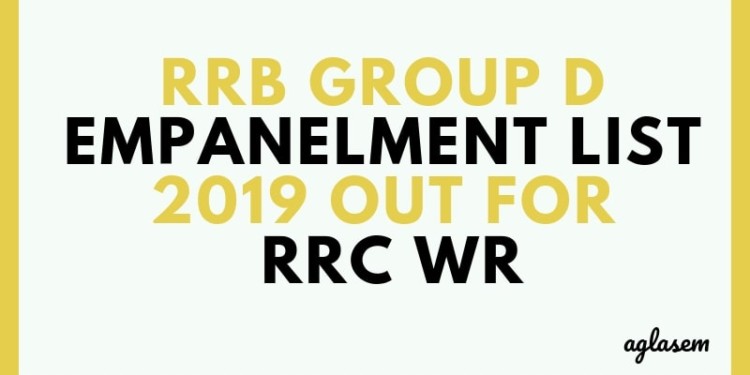 To check the RRB Group D Empanelment list, go to the official website of the RRC WR which is, rrc-wr.com. Now, navigate to the link of “Declaration of Provisional Panel Part-1 CEN No 02/2018 (Level-1 Posts of 7th CPC Pay Matrix)”. Now the RRB Group D final list is going to appear on the screen. Press Ctrl+F and type the roll number. If the roll number of the candidate gets highlighted in the empanelment list then, he or she is eligible for the final appointment. Congratulations!

The headquarter of the RRC Western Railway is in Mumbai. This region is divided into six divisions which are Vadodara, Ahmedabad, Rajkot, Bhavnagar, Ratlam, and Mumbai Central. Candidates whose roll number is present in the merit list can be called at any of the railway divisions. The number of candidates who are eligible for the appointment is 4050. Out of which 2060 are from Unreserved category, 908 from OBC, 580 from SC, 327 in ST, 31 in Ex-serviceman, and 144 in CCAA.

The RRB Group D Recruitment 2018-19 is open for 62907 vacancies. The posts which come under Group D are helper, cook, assistant pointsman, keyman, gateman, porter, etc. The shortlisting of the candidates is as per the computer-based test, physical test, and document verification. Candidates called for the document verification are also required to pas the medical test held at the railway hospitals.

In case, a candidate clears all the stages but fails to pass the medical exam then, he or she will not be recruited for the post. To be appointed in the railway staff, visual acuity standard is an important criterion. Aspirants clearing all the stages are recruited on the pay scale of 7th CPC pay matrix and will get Rs. 18000, plus allowances.