Railway Recruitment Board (RRB) has cancelled RRB ALP CBT 1 Result. The result was announced on November 02, 2018. However, as per the latest notification the Board is checking all the answers and score again and will soon release the revised score and selection list. This has come as shock to 48 lakh Loco Pilot and Technician aspirants, who are again anxious to know if they have qualified the exam or not.

RRB has properly explained the reason for nullifying the result. Along with the result, the final answer key was also released. Then, candidates and experts submitted objections against the key. The representation submitted by the candidates stands valid and now RRB is re-checking all the answers sheet. The re-checking of answers is expected to bring out different score of the candidates. Hence, the RRB ALP selection list will also vary. Candidates can read the official notification from below. 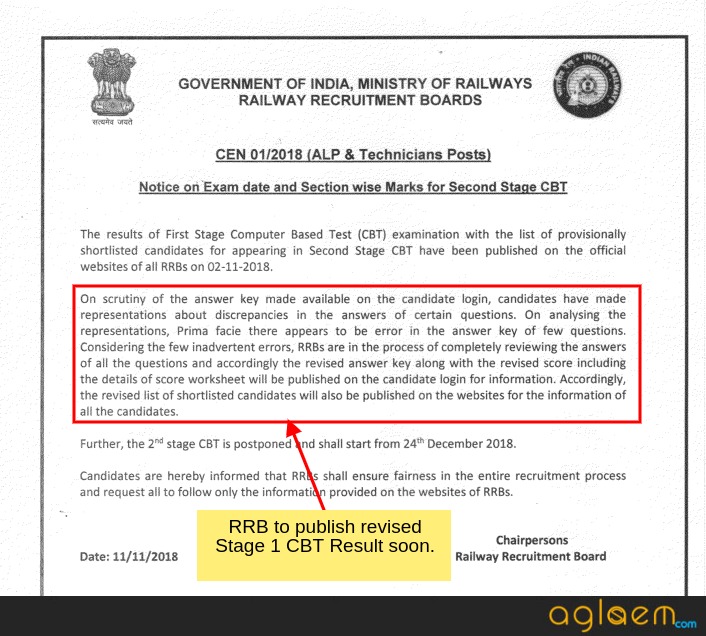 The revised result of RRB ALP will also be released online, on the website of individual RRBs. To check it, the candidates will have to visit the official website of the selected RRB and then check their roll number in the selection list. The score of the candidates will be provided in through the login. This may also lead to changing of the RRB ALP cut off.

This has also lead to delaying of RRB ALP CBT 2. Now, the second stage CBT will begin from December 24, instead of December 12. The complete schedule for CBT 2 will be provided soon.

RRB ALP Stage CBT 2 will consist of Part A and B. Both the Parts are important but the score of only Part A will be used to prepare the final merit list. On the other hand, Part B of CBT 2 will only be qualifying in nature. In both the parts, questions will be of multiple choice type. However, in Part A, the total number of questions will be 100 and in Part B it will be 75.

Candidates will get 90 minutes to solve Part A and the duration of Part B will be 60 minutes. The questions in Part A will be asked from maths, general intelligence and reasoning, basic science and engineering, and general awareness on current affairs. Whereas, in Part B, the question will be asked from trade syllabus prescribed by Director General of Employment & Training (DGET).