The Rajasthan Police has canceled the Second phase of the ongoing Rajasthan Police Recruitment 2018. The decision to cancel the recruitment exam is taken after reports emerged of gangs involved in hacking computers to help candidates cheat in the online examination.

SOG wing of Rajasthan police busted gangs which were facilitating cheating in the examination by various modus operandi in which 26 people have been arrested already. The first phase of Rajasthan Police Exam 2018 had been held already, in which, 5 lakh candidates appeared. Most probably for new exam, date will be conveyed through new admit card for Rajasthan Police exam. 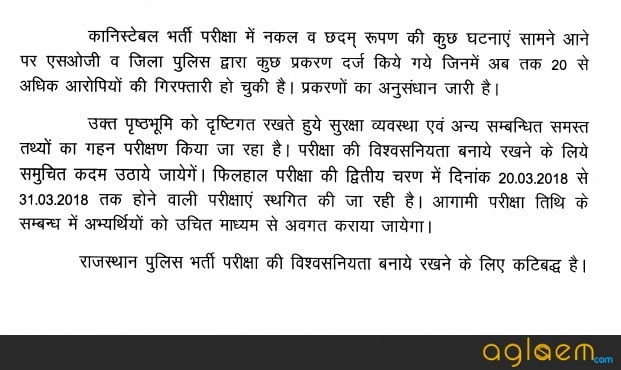 The examination was meant for the post of 5,390 constables and nearly 16 lakh candidates were appearing for it. One of the senior officers of police headquarters commented that “The examination has lost its credibility and it is not wise to continue the process of examination. Thus, on the recommendation of the board, it was decided to cancel the exam.”

The first phase of the exam was held on March 07. For the first time, Rajasthan Police conducted its first ever computer-based test. But then on March 12 and 14, 2018, cases of computer hacking were reported.

With more investigation, the police also got information about an organized racket indulging in cloning of biometric identity. They even provided expert proxy examination solvers to answer the papers on behalf of real candidates. Some these people who have been arrested are highly-skilled IT professionals and have in the past facilitated similar cheating in states like Delhi, Haryana and Uttar Pradesh, among others.

The new exam dates have not been announced by the Rajasthan Police. However, it is expected that the authorities may soon declare the exam date for Phase 2 of the Rajasthan Constable Recruitment Exam 2018.

This has come across as a shame for the authorities as it shows that the State government is not seriously conducting the constable recruitment exam. In the bigger picture, it is the State Govt. which is to be because the blamed private companies were actually blacklisted by the government but are now given contract of taking online exams. So now these companies on different names are operating in the system.

This news has definitely created a lot of buzz in the Rajasthan Police Department. However, as much as the Department and State Govt are to be blamed, the candidates are to be blamed as well. These people operate because the examinees who are scared to fail and want an easy way to succeed, seek their help.

Putting the complete blame on authorities and averting your eyes from the reality is not justified at all.

In a separate cheating racket case, three accused, including prime accused and the center director was also arrested. It was found that the gang made a thumbprint impression of the original candidate and pasted it on the thumb of the proxy who took the exam. To ensure that the thumbprint would last at least one hour, they used some oil. Candidates managed to cheat the biometric attendance system.

Who do you think is to be blamed for this, the Authorities or the students? What do you think could be done to avoid any further situations like this?