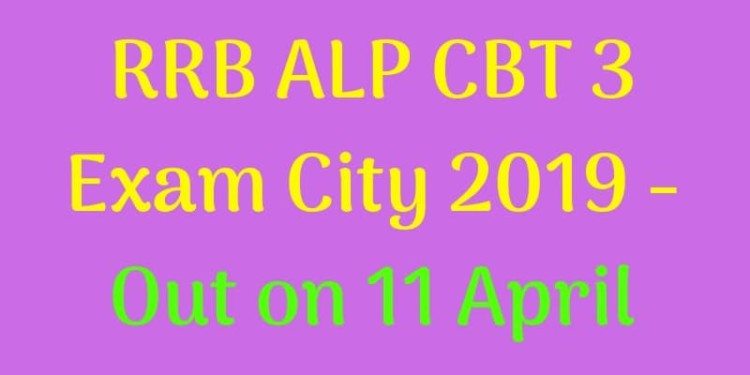 Railway Recruitment Board (RRB) will release RRB ALP CBT 3 Exam City 2019 on April 11, 2019. Earlier, the Board had to start the login for RRB ALP Exam City of CBT 3 on April 09, at 6:00 pm. However, now the login will start working on 12:00 hours, on the new date. Railway Board will only issue the admit card, in the name of those candidates who qualified CBT 2.

The admit card of RRB ALP CBT 3 is to be downloaded and printed on an A-4 sheet. It should be clear and all the details in it should be correct. On the exam day, the candidates will have to carry one valid photo id proof, vision certificate, and passport size photograph. The vision certificate is a mandatory document and candidates should carry it in the prescribed format.

A valid id proof can be aadhar card, voter id card, pan card, college id, etc. The candidates will have to make sure that the photo and details on the id should be the same as that it the application form. Also, the passport size photograph must also match with the one uploaded in the application form. The size of the photo should be 35 mm x 45 mm.

RRB ALP CBT 3 will be held on April 16, 2019. For the CBT 3, candidates shortlisted are 8 times the number of vacancies. The test is divided into 5 subjects each known by the name of test batteries. The sections are Memory Test Battery, Depth Perception Test Battery, Concentration Test Battery, Perceptual Speed Test Battery, and Following Directions Test Battery. To be eligible for the next round, candidates have to obtain 42 marks in each test battery. In this round questions are asked in Hindi and English. There will be no negative marking in stage 3 CBT. It is mandatory for the candidates to be present with the vision certificate on the day of the exam.