National Institutional Ranking Framework (NIRF) 2019 Rankings has been released by President Ramnath Kovind. According to the ranking of higher management educational institutes, Indian Institute of Management (IIM) Banglore tops the list with 81.34 scores. IIM Banglore now ranks one position higher from the last year ranking. In the previous year, IIM-B ranked at 2nd position with 77.33 scores.

The rank of IIM Ahmedabad dips by one position to Rank #2. Though its performance in terms of the score has been increased to 80.6 from 79.18. In the list of top 10 Mangement institutes as per the NIRF Ranking, there are 7 IIMs, 2 Indian Institute of Technology (s) with Xavier Labour Relations Institute rank rises by three positions. This year, IIM Indore has replaced IIT Roorkee from the list of top 10 Management B-schools in India.

IIM Banglore is now the top management as per the NIRF Ranking by MHRD. Out of five parameters, IIM Bangalore scores 100 in “Perception” in terms of competitiveness and research. For management education, IIM B offers PGP,  FPM, PGPPM, PGPEM, and EGEP.

In the NIRF Ranking 2019, IIM Ahmedabad ranks #2 with 80.61 scores. It ranks highest in the parameter “Graduation Outcomes” with 98.10 out 100. It shows outcomes in terms of placement, median salary, etc. Candidates interested in management education can pursue PGP, PGP-FABM, FPM, PGPXE-PGP. The scores accepted by IIM A are CAT and GMAT. 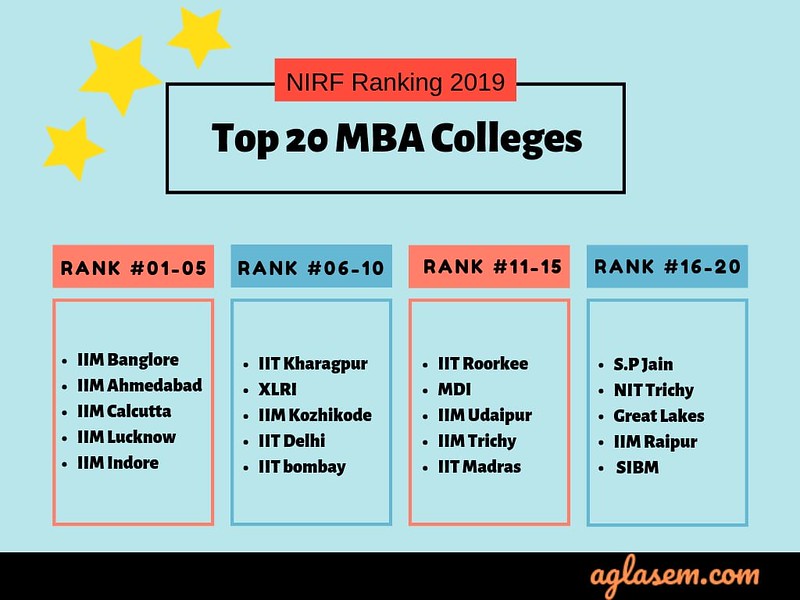 IIM Calcutta Ranks #3 as per the NIRF Rankings. The position of the institute remains unchanged this year. However, the scores have been increased to 79.05 from 77.08. Also, IIM Calcutta remains competitive in terms of “Graduation Perspective”. The institute offers PGDM / PGP, FPM, PGPEx, PGDBA, and PGPEX-VLM.

IIM Lucknow Ranks #4 with no change in position from last year. IIM-L also ranks highest in graduation outcomes. The Institute offers PGP, PGP for Executives and Fellow programmes. For the admission to the two-year post-graduation programme, candidates must excel in each round as specified in the IIM Lucknow Admission Criteria.

After IIMs, the top position is occupied by IITs. There are 7 IITs which offer MBA programmes. IIT Kharagpur accepts CAT and GMAT scores for admission to the management courses. The IIT Kharagpur’s Cell, Vinod Gupta School of Management (VGSoM) imparts quality education to the MBA aspirants.

From the queue for IITs and IIMs, XLRI ranks #7 with a score of 65.33. The institute is situated in Jharkhand and offers postgraduate, doctoral level, part-time, corporate programmes. For admission to PGDM programmes, it conducts its own entrance test known as Xavier Aptitude Test (XAT).

IIM Kozhikode rank has now dipped by two positions. Its score in the lastest NIRF Ranking 2019 is 64.82. It offers PGP, EPGP, Ph.D., Executive PGP, MDP, and FDP. For the PGP admission, IIM Kozhikode accepts CAT scores. This year, it is highly likely that CAT 2019 will be conducted by IIM Kozhikode.

NIRF Ranking – The NIRF ranking (2019) is released by MHRD every year. The institutes participating in the ranking methodology in the given time period. Further, the ranking is released on various parameters such as Research & Professional Practices, Teaching & Learning Resources, Outreach & Inclusivity,  etc.