Railway Recruitment Boards (RRB) has started RRB ALP 2018 Exam Fee Refund. The fee is begin refunded to candidates who appeared for First Stage Computer Based Test (CBT) for ALP/Technicians against CEN 01/2018. However, today, on December 12, 2018, RRB has published a notice in this regards, that states that there are errors in the bank details of the candidates due to which many refunds have failed. 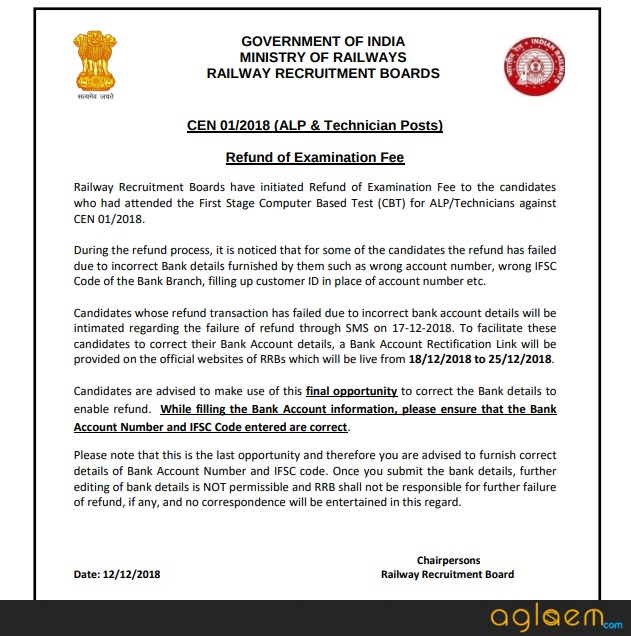 In addition to that, candidates whose RRB ALP 2018 exam fee refund transaction has failed due to incorrect bank account details will be intimated regarding the same through an SMS on December 17, 2018.

Via the bank details rectifying link, the candidates will be able to rectify errors like wrong account number, wrong IFSC Code of the Bank Branch, filling up customer ID in place of account number etc.

The notice stresses that this is the final opportunity to correct any errors in the bank account details. Also, it underlines while filling the Bank Account information the Bank Account Number and IFSC Code entered must be correct.

RRB has also declared that once the bank details are submitted this time, no further editing will be allowed. Also, RRB shall not be responsible for the further failure of refund, if any, and no correspondence will be made anymore in this regard.

Now, the candidates who have appeared in the first stage CBT exam will get their exam fee refunded to their bank accounts. The RRB ALP 2018 CBT 2 exam is scheduled to be held from January 21 to 23, 2018.