The dates have been notified via a public noitce, at jeemain.nic.in on March 13, 2019. The general election dates have been recently announced and thus keeping in mind the dates of the election, NTA has released the above mentioned dates for JEE Main 2019 April Paper 1 (B.E/B.Tech) and Paper 2 (B.Arch/B.Plan). 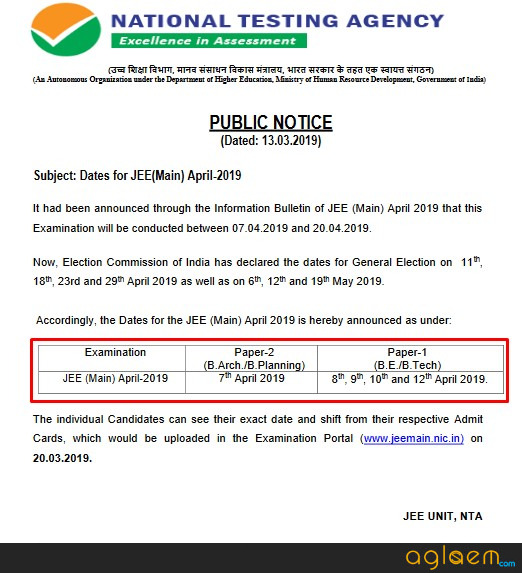 JEE Main 2019 is being held twice a year from 2019. NTA is conducting the exam for the very first time after CBSE. The exam is being held in CBT format entirely, except for the part 2 of the paper 2 that is the drawing sections. The January exam was held on January 08, 09, 10, 11 and 12, 2019. The result for which has been declared.

After the release of the JEE Main 2019 April exam result, the final AIR based on the best scores of the candidates out both the attempts will be released. The admission to the NITs, IIITs and CFTIs will be based on this AIR.