Home » Competitive Exams » Not 9.5 lakh but 588604 Candidates Shortlisted as per RRB ALP Result for CBT 2 Exam Railway Recruitment Board (RRB) has announced RRB ALP Result 2018 on November 02, 2018. The result was announced via pdf, in which roll numbers of the qualified candidates are mentioned. The score of RRB ALP has also been released via the login. The total number of candidates who have qualified for CBT 2 are 588604.

Heights and Lowest Number of Candidates Are from these RRBs 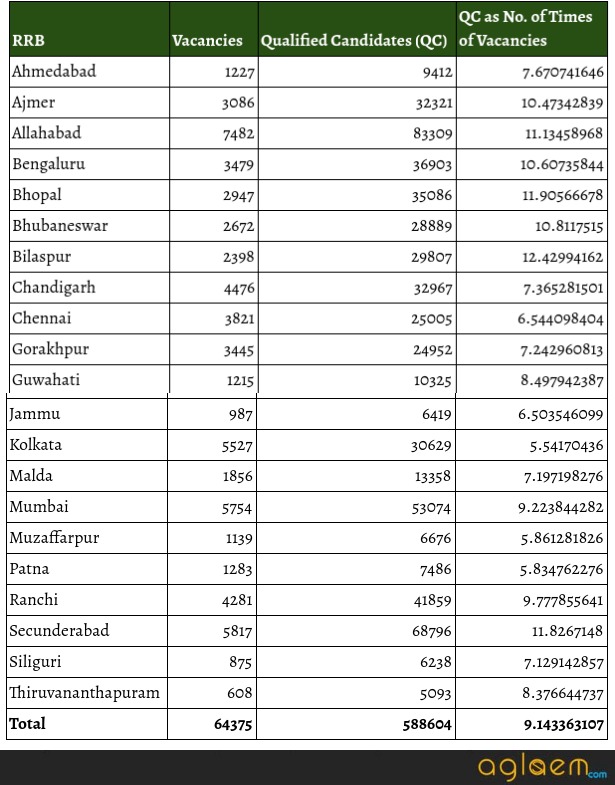 Now, the candidates are waiting for the release of the Admit Card for stage 2. Students will be getting the RRB ALP Stage 2 Admit Card in the month of December, at least 4 to 7 days before the exam. The admit card will be released online, in the login which will be available on the official website of 21 RRBs.

RRB ALP CBT 2 will consist of Part A and Part B. Part A is important, the marks of it will be used to prepare merit list. There will be 100 MCQ in Part A and it will be of 90 minutes. The question will be asked Mathematics, General Intelligence and Reasoning, Basic Science and Engineering, and General Awareness and Current Affairs. The cutoff for this section is 40% for UR, 30% for OBC / SC, and 25% for ST. On the other hand, Part B is only qualifying in nature and in it all the questions will be asked from trade syllabus of RRB, as prescribed for DGET.  To qualify in part B, at least 35% marks are necessary.