NEET 2021 Result Will Not Be Put On Hold For 2 Students: Supreme Court Stays Bombay HC Order

The Supreme Court of India has allowed the NTA to declare the NEET 2021 result. A fresh notice has been issued to NTA to resolve the petioner's greivances. 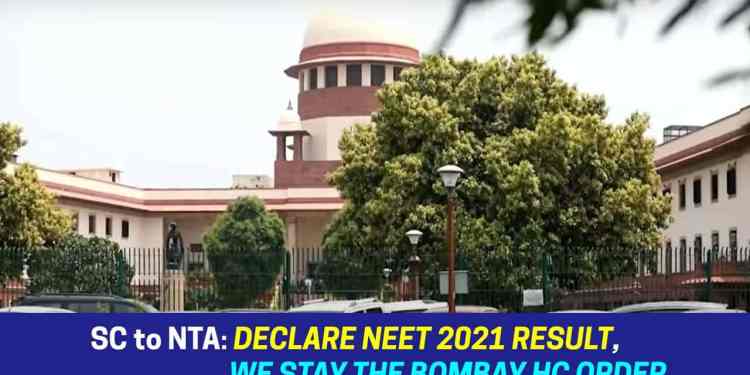 The Supreme Court of India has allowed NTA to release the NEET 2021 results reverting the earlier verdict made by the Bombay High Court. The High Court had directed the NTA to re-conduct the NEET exam for two aspirants who had allegedly faced issues while appearing for the exam. The apex court further recognised the NTA’s petition and cited that the results of around 16 lakh students can not be delayed any further.

The Bombay High Court had ordered NTA to conduct the exams of Vaishnavi Bhopali and Abhishek Shivaji, who alleged that they had received different sets of question paper and answer booklets. The Centre had moved to the Supreme Court against this decision. The appellant petitioned that the NEET Results 2021, despite being ready, cannot be declared due to the hold put by the Bombay HC’s order. A delay in this scenario will hinder the undergraduate medical admissions, the appeal further added.

The key statements in today’s critical decision were as follows.

“We stay the High Court judgment. NTA can announce NEET UG results”, said the bench of Justices L Nageswara Rao, Dinesh Maheshwari and BR Gavai. They further stated, “We will decide what happens to the two students upon reopening. But we cannot hold the results of 16 lakh students”.

The Supreme Court of India today dismissed the petition filed by the students and decided to revert Bombay HC’s verdict. “We stay the High Court judgment. NTA can announce NEET UG results”, said the bench of Justices L Nageswara Rao, Dinesh Maheshwari and BR Gavai. The verdict further read, “We’ll issue notice and stay the HC Judgement…you announce the results. There are 16 lakh students who are eagerly waiting for the results. We will see what we can do for these 2 students.”

The bench also clarified that they will decide what happens to the two students upon reopening and issued a fresh notice to NTA scheduled to be heard on November 12.

This year, the NTA has been constantly surrounded by controversies alleging disruptive conduction of examination. Earlier, it was reported that the NEET question paper had leaked. The Central Bureau of Investigation (CBI) had also made arrests in this regard and stated that certain groups prompted answers to students. In addition to that, recently, NTA was directed by the Kerala High Court to probe into a reported instance of OMR sheet manipulation.