Home » NEET 2019 Moderate in Level of Difficulty; Physics Toughest Of All

NEET 2019 Moderate in Level of Difficulty; Physics Toughest Of All 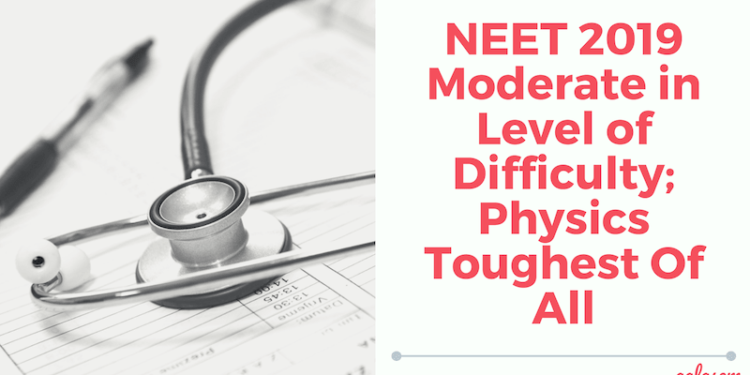 On May 05, 2019, National Testing Agency (NTA) has successfully conducted NEET 2019 across its 154 cities in offline mode. It was conducted in single slot, from 2 PM to 5 PM. This was the first time, NTA has conducted any national level exam in offline mode. The exam was cancelled across the various centres of Odisha. Further, NTA will notify the candidates regarding the revised exam date for such candidates.

As per this year’s exam analysis, candidates found Physics to be the toughest of all, whereas Chemistry was the easiest. Biology was even considered to be an easy section. Majority of candidates found, this year’s paper to be much easier than the previous year’s. Which, in turn,may lead to NEET 2019 cut off percentile to be raised, this year. General consensus was received from candidates on how conceptual and application based questions did the Physics section have.

All in all, students were found to be quite happy with the difficulty level of the exam. And were satisfied with their performance in the exam. Candidates who are eager to estimate their performance, can now do so with the help of the answer keys. Several unofficial sources has released their version of NEET 2019 answer keys. But, the official exam conducting body, i.e NTA is yet to release the same.

To know more about NEET 2019, Stay tuned with Aglasem News!