NEET 2018 details have not even been announced but the never-ending debates are only multiplying. A few days back, rumors for merging of the state board and NEET 2018 Syllabus create quite an inessential fuss. As per the newspaper reports, the decision to consider the inclusion of state board syllabus was done in order to ensure that state board students were not at disadvantage. However, CBSE has clearly brushed off all these rumors.

The Board released a notice on cbseneet.nic.in that there will be no change in NEET 2018 Syllabus and it will be same as last year. Statement regarding exam pattern has not been made yet. The notification for NEET 2018 is expected to release by the end of January 2018. 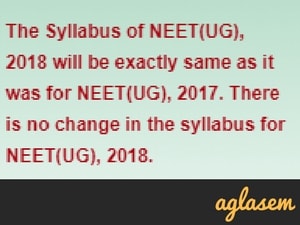 With this, students and parents all over the nation have cooled down a little. The exam is just around the corner and implementing such a change would not only hamper their performance and also with only 3 months to go, it is too late for the students to study something new all over again. Students have been working really hard for last two years and have been following the NCERT books as per the CBSE syllabus. Any drastic changes at this time will only lead to increased stress and chaos among the students.

The curricula in few states is based on CBSE pattern, however, syllabus of states like West Bengal, Tamil Nadu, and Maharashtra are up to 40% different and if all those different portions will be taken into account for NEET papers most students, be it from CBSE or non-CBSE board, will be in for a major shock.

The CBSE is likely to organize NEET 2018 in the first week of May. Last year, about 12 lakh students had taken up the test across India.

The troubles with NEET seems never-ending. Last year, apart from English and Hindi, CBSE conducted NEET in 10 languages, including Bengali, Tamil, Telugu, Marathi, Assamese, Gujarati, Oriya and Kannada. However, some students complained that the paper in regional language was tougher and different in comparison to paper in the English and Hindi Language. At the end, the students were the one who suffered.

NEET 2018 shall consist of one paper containing 180 objective type questions from Physics, Chemistry and Biology (Botany & Zoology). The exam will be held in pen and paper mode and duration of the test shall be 03 hours. As far as the marking scheme is considered, the candidate shall get 04 marks for every correct answer and there shall be a negative marking too. So, for every incorrect answer, 01 marks will be deducted. More than one answer indicated in a question will also be considered as incorrect response and will be negatively marked.

The Medical Council of India has recommended students to study from class 11th and 12th NCERT. For Physics, topics such as Physical world and measurement, Kinematics, Laws of Motion, Work, Energy and Power, Electromagnetic Induction and Alternating Currents, Electromagnetic Waves, Gravitation,  Properties of Bulk Matter, Thermodynamics, Behaviour of Perfect Gas and Kinetic Theory, Oscillations and Waves from class11th NCERT. Topics such as Electrostatics, Current Electricity, Magnetic Effects of Current and Magnetism, Motion of System of Particles and Rigid Body, Optics, Dual Nature of Matter and Radiation, Atoms and Nuclei, Electronic Devices can be studied for Class 12th Physics NCERT.

For Biology, the topics from Class 11th are Diversity in Living World, Structural Organisation in Animals and Plants, Cell Structure and Function, Plant Physiology, Human physiology and from Class 12th, topics to be covered are Reproduction, Genetics and Evolution, Biology and Human Welfare, Biotechnology and Its Applications, Ecology, and environment.

Benefits of studying at night and how to study late night during exams.